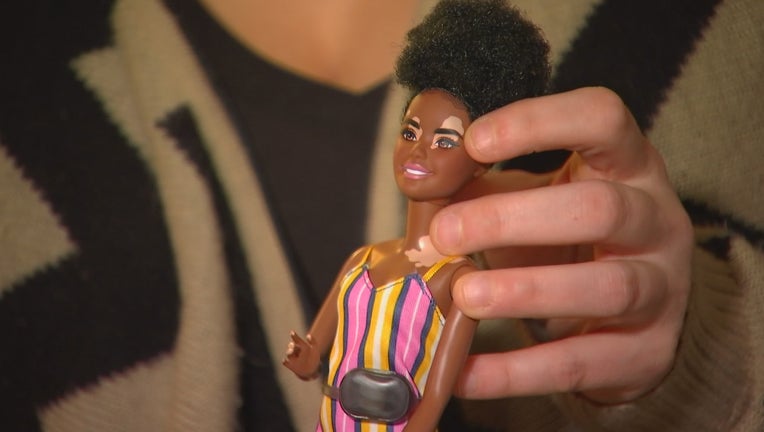 Barbies with vitiligo were donated to Minnesota Vit Friends, the Minnesota chapter of the Vitiligo Support Group.

COON RAPIDS, Minn. (FOX 9) - Growing up with vitiligo can make some kids feel isolated, but a new toy is helping those with the skin disorder understand that they are not alone.

Like a lot of kindergarteners, Lyric Strong loves playing with dolls, but one in particular holds a special place in her heart.

Growing up with vitiligo can make some kids feel isolated, but a new toy is helping those with the skin disorder understand that they are not alone.

"She was able to identify or see herself in this doll,” said Margaret Chell, Lyric’s mother. “It’s great to have a doll that looks like her."

Lyric has vitiligo, an auto immune disease that causes her skin to lose its pigment.

"Her vitiligo is on her left eye, which this doll has as well," said Chell.

Experts say it affects 1 to 2 percent of the population, like the late singer Michael Jackson, model Winnie Harlow and former Vikings defensive line coach Karl Dunbar. There are treatments, but there is no cure.

"It can affect anybody,” said Alicia Roufs of Minnesota Vit Friends, the Minnesota chapter of the Vitiligo Support Group. “Any age, any race, any color, any sex. It does not matter. It's a non-discriminatory skin condition."

Last year, Mattel came out with a Barbie who has vitiligo as part of its Fashionista line that features dolls with different shapes, sizes, and skin tones to be more inclusive. The company donated 56 dolls to Minnesota Vit Friends to give to any children that attend a national conference in the Twin Cities that the chapter is hosting this summer.

"I think it helps them feel normal, gives them a normalcy to know that there is something out there specifically for them that was made for them," said Roufs.

Hopefully in the process, the dolls will help make self-acceptance as simple as child's play.

"That it’s accepted, that she can feel like one of the other girls, that she sees herself in this doll," said Chell. "It's not something she has to struggle with."

The World Vitiligo Day conference will be held June 26-28 at the Minneapolis Airport Marriot in Bloomington. For more information, click here.