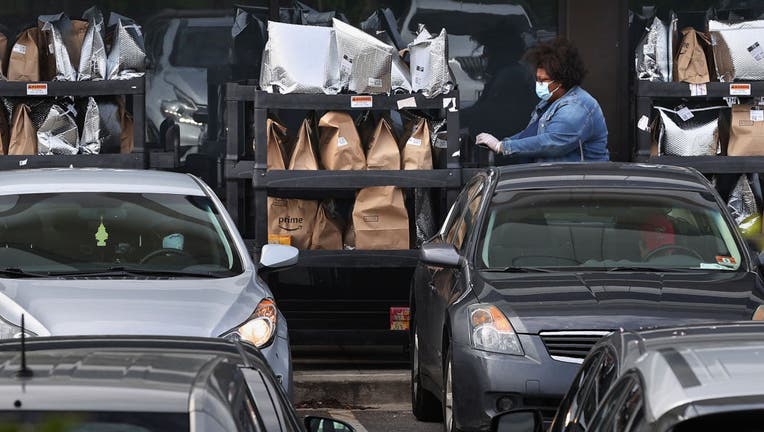 FILE - An Amazon Flex driver loads their personal vehicle with packages outside an Amazon Fulfillment Center on April 14, 2020 in Baltimore, Maryland. (Photo by Chip Somodevilla/Getty Images)

SEATTLE - Amazon will pay nearly $62 million to settle charges with the Federal Trade Commission that it took tips from delivery drivers over a two and a half year period.

The Federal Trade Commission said Tuesday that between late 2016 through 2019, the online giant didn’t pass on tips to drivers — even though it promised shoppers and drivers it would do so.

According to the FTC’s complaint against Amazon and its subsidiary, Amazon Logistics, the company regularly advertised that drivers participating in the Flex program would be paid $18–$25 per hour for their work making deliveries to customers.

The FTC complaint says ads provided to drivers prominently featured statements like, "You will receive 100% of the tips you earn while delivering with Amazon Flex." It also alleges that Amazon assured its customers that 100% of any tips they paid would go to the driver.

Amazon Flex is a program in which drivers, deemed by Amazon as independent contractors, agree to make deliveries using their personal vehicles. Flex drivers deliver groceries and other products ordered through Prime Now and Amazon Fresh, which allow customers to tip the drivers.

In late 2016, the FTC alleges that Amazon shifted from paying Flex drivers the promised $18–$25 hourly rate plus the full amount of customer tips, to paying drivers a lower hourly rate — a shift that it did not disclose to drivers.

Amazon is accused of then using the customer tips to make up the difference between the new, lower hourly rate and the promised rate. This resulted in drivers being shorted more than $61.7 million in tips, the complaint says.

If you receive an email containing an order confirmation for an item on Amazon that you didn’t purchase, be warned — it could be a phishing scam.

According to the FTC, Amazon didn’t stop taking the money until August 2019 when the company found out about the FTC’s investigation.

"At that time, Amazon returned to a pay model where it pays drivers an identified base amount plus 100 percent of tips and gives the drivers a breakdown of their pay and tips," the FTC said in a statement about the settlement.

The Seattle-based company will pay $61.7 million to settle the charges, which the FTC said will go back to drivers. Amazon will also be prohibited from making any changes to how a driver’s tips are used as compensation without first obtaining the driver’s informed consent.

Amazon.com Inc. did not immediately respond to a request for comment Tuesday.

RELATED: 6,000 Amazon workers in Alabama to vote on forming first US union in tech giant’s history