Lake County residents who fled from the Cache Fire and firefighters who tried getting the flames under control descried the frantic scene yesterday as mobile homes became engulfed in flames.

CLEARLAKE, Calif. - Firefighters in California were beating back 15 fires as of Thursday, including three blazes that were greatly affecting the northern part of the state, and where smoke from many of them wafted into the Bay Area, causing days of air quality advisories.

Thousands of people have been evacuated, hundreds of structures have been destroyed, but to date, miraculously, no one has died in any of t hem.

Here's a look at the three most significant ones to the Bay Area: 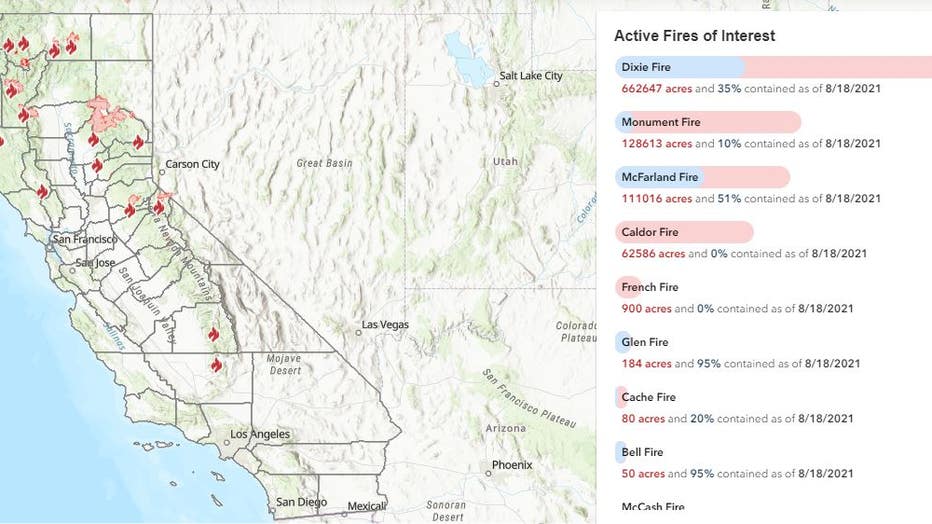 This fire is the most recent, erupting Wednesday afternoon in Lake County. While it has charred a relatively small area of 80 acres, it already has destroyed at least 60 mobile homes situated at the Creekside Mobile Home trailer park near Clearlake.

"All you heard was explosion after explosion cause they're all on propane tanks," said Todd Koerlin of Clearlake, who lived there.

Up to 1,600 people were evacuated, but many were allowed to return home by Wednesday night.  It wasn't immediately clear how this fire started.

Officials say the City of Clearlake lost at least 60 homes in the rapidly developing Cache Fire.

This fire is still raging through the Sierra Nevada, specifically in El Dorado County, which incinerated the rural town of Grizzly Flats. It began Saturday as a vegetation fire and exploded over the weekend.

More than 5,000 residents were evacuated from El Dorado County, mostly Pollack Pines, and some parts of Amador County fell under an evacuation warning.

Gov. Gavin Newsom declared a state of emergency for this fire on Tuesday.

Cal Fire’s Amador-El Dorado Unit said there were at least two civilian injuries from the Caldor Fire, both described as serious and requiring airlifting to hospitals.

As of Thursday, it had burned about 68,630 acres and was 0% containment. This fire is east of Sacramento.

Two weeks after the Dixie Fire destroyed most of the Gold Rush-era town of Greenville, the Caldor Fire a few miles southeast exploded through tinder-dry trees and ravaged Grizzly Flats, a forest community of around 1,200 people.

This fire is the largest and the oldest blaze, and became California's single largest wildfire blaze on Aug. 9.

As of Thursday, it has charred 699,666 acres surpassing the earlier reported size of 1,000 square miles, the size of the state of Rhode Island. The fire began a month ago. So far, it has destroyed about 1,200 structures.

It swept through the small Gold Rush-era town of Greenville and Canyondam, essentially wiping them out. Lassen Volcanic National Park has been closed.

The fire originated and initially spread in a steep area near the Feather River Canyon.

Fire crews were able to make some progress on Wednesday, increasing containment to 35%, where it remained Thursday evening. Some evacuation orders were lifted in Plumas and Tehama counties, where some people hadn’t seen their homes for a month. The other counties affected are Butte and Lassen.

Dixie Fire continues to expand as containment remains at 31%

The Dixie Fire continued to expand after burning for more than a month.

This story was reported from Oakland, Calif.