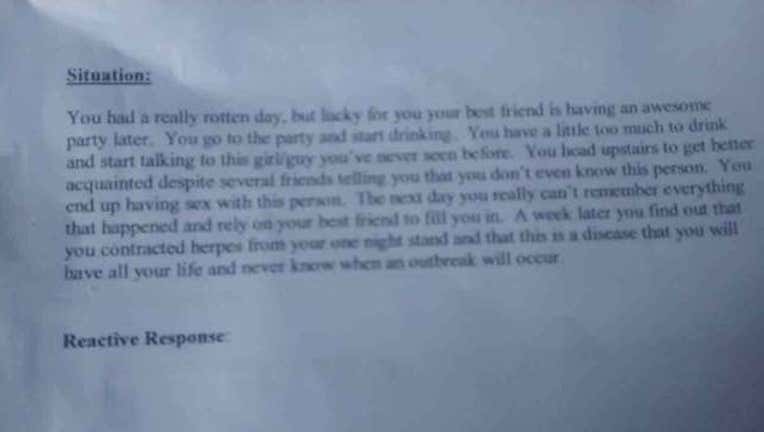 TRENTON, N.J. (AP) - A New Jersey mother said she was shocked when her eighth-grade son showed her a homework assignment that asked him to consider what he would do if he contracted herpes after drinking and having a one-night stand.

Amy Loper said her son was given the assignment in his language arts class at the Myron L. Powell Elementary School in the Cedarville section of Lawrence Township.

The question asked students to respond to the following: "You had a really rotten day, but lucky for you your best friend is having an awesome party later. You go to the party and start drinking. You have a little too much to drink and start talking to this girl/guy you've never seen before. You head upstairs to get better acquainted despite several friends telling you that you don't even know this person. You end up having sex with this person. The next day you really can't remember everything that happened and rely on your best friend to fill you in. A week later you find out that you contracted herpes from your one night stand and that this is a disease you will have all your life and never know when an outbreak will occur."

Loper, who openly talks to the 13-year-old about such topics, said her son thought it was funny. She said she knows some people think the scenario could happen at that age, but she believed it was the wrong class for such an essay.

She said the school superintendent told her it was part of the core curriculum and was a companion with a book the students were given titled "The 7 Habits of Highly Effective Teens."

Her son did not complete the assignment.

Messages left for the school superintendent were not returned. The school was closed for the New Jersey Education Association's annual convention.

Copyright 2015 The Associated Press. All rights reserved. This material may not be published, broadcast, rewritten or redistributed.