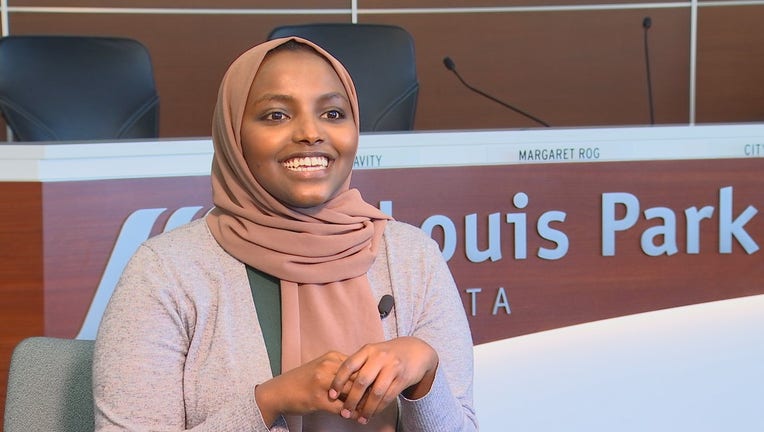 Nadia Mohamed, 23, is both the youngest and first Muslim-American to be sworn onto the St. Louis Park City Council. (FOX 9)

“You just kind of see the need that your community needs and you try to meet that need,” Mohamed said after her first meeting Monday night.

At 23 years old, Nadia Mohamed is the first Muslim-American woman of color and the youngest St. Louis Park City Councilor sworn into office.

Born in Somalia, Mohamed moved to St. Louis Park with her family in 2007.

Her interest in city government led her to kick off a campaign that saw her clinch more than 60 percent of the vote in November.

“It shows progress. It shows that we’re ready for that change, and we are constantly looking for our representatives and for our voices,” she said.

A first-ring suburb, St. Louis Park is home to nearly 50,000 people. Over the next four years Mohamed, who is a renter, says she looks to address racial equity, affordable housing, and climate action.

“I am all for progress. I’m all for building one culture for St. Louis Park and us deciding what we need to do as a city, as a community,” she added.

“I’m working towards a city that works for everybody - and that means everybody,” Mohamed said.