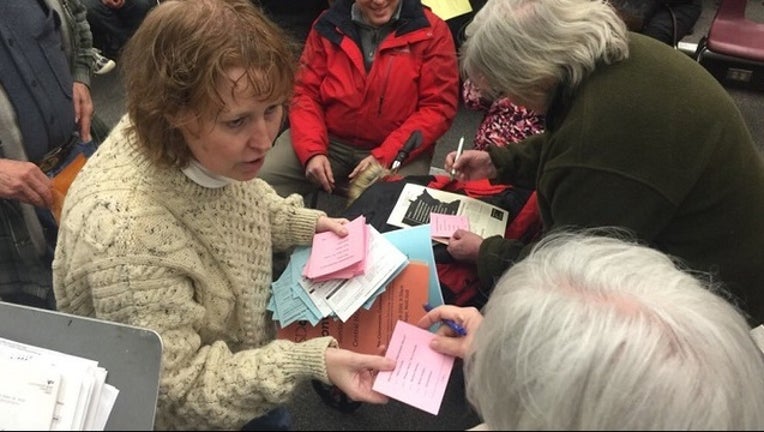 Presidential preference ballots are handed out at a caucus at Highland Park Middle School in St. Paul, Minnesota on March 1, 2016. Photo by Tim Blotz / Fox 9.

ST. PAUL, Minn. (KMSP) - The great democratic ritual we call the Minnesota precinct caucuses take place on Tuesday, Feb. 6. This is more than a party tradition, it's also codified in state law. Minnesota state statute 202A.14 calls for precinct causes to be held every general election year on a date agreed to by the Minnesota Democratic-Farmer-Labor Party and Republican Party of Minnesota chairs.

First, some background. The precinct caucuses are the basic building blocks of party participation for the DFL and RPM. At its simplest form, these caucuses are neighbors talking to neighbors about issues they want their respective parties to stand for in the fall elections. There are 4,117 precincts in Minnesota -- not all of them will caucus as single units. For efficiency, many precincts will be grouped together into a single caucus. They will elect local party leaders and select delegates to the next round of party conventions who will in turn endorse candidates for public office.

Caucus Night in Minnesota: By law, the caucuses start at 7 p.m. and are open to any resident who will be eligible to vote in the general election. State law allows workers to request time off to attend the caucuses provided they give their employers ten days notice. Schools and even universities are required to cancel all events on caucus night and local governments are forbidden by law to hold any public meetings. This gives you an idea as to the importance Minnesota's founders and successive elected officials have placed in this tradition.

Each caucus starts by electing a person to chair the caucus meeting and then electing a secretary. Once the caucus chair and secretary have been selected, they will pass out the gubernatorial preference ballots. Finally, the caucus will elect a precinct officers and delegates to the next party level convention.

The big X-factor will be turnout. The presidential election in 2016 drove record breaking participation to the March 1 caucuses. The Republican Party of Minnesota established a new record of 112,000 participants across the state. The DFL attracted more than 200,000. By most accounts it was chaos. Many caucuses ran out of ballots, and participants complained online precinct finders sent them to the wrong locations, and when they found the right place there was no parking.

New Hampshire Senator Bernie Sanders won the majority of DFL delegates that night while Florida Senator Marco Rubio collected the most GOP delegates. But the voter experience was so bad that lawmakers passed and Governor Dayton signed into law a new presidential primary to take place in 2020. No one is expecting presidential year turnout on Feb. 6, and secretly party officials are worried about the Minnesota Super Bowl distracting from the very fact the caucuses are only two days after the game.

Preference Poll: While winning the preference poll is a sign of initial strength, it is by no means a clear barometer of who win the party endorsements or primaries. In fact, in 2010 RT Rybak and Margaret Anderson Kelliher tied in the DFL preference poll, but it was Mark Dayton who won the general election. Likewise, in 2014 Marty Seifert won the poll for the RPM, but Jeff Johnson ultimately won the party endorsement. Both the DFL and the RPM hope to report results for by 10 p.m.

Here are the 2018 DFL candidates on the preference ballot:

Chris Coleman: Former St. Paul Mayor who chose not to run for a third term in order to launch his campaign for governor. colemanforgovernor.com

Tina Liebling: State Representative from Rochester. An expert in health policy with a J.D. from Boston University. tinaliebling.com

Erin Murphy: State Representative and former House Majority Leader. A nurse by background, Murphy was the first DFL candidate to launch her campaign for governor. murphyformn.com

Rebecca Otto: State Auditor. During her tenure the Republican legislature has given counties the option of hiring private CPA firms to conduct county audits, thereby reducing her constitutional power. Her lawsuit challenging the law is now before the Minnesota Supreme Court. rebeccaotto.com

Paul Thissen: State Representative. Paul is the former Speaker of the House during Governor Dayton's first term and lost the DFL majority in 2014 and was replaced as speaker by Republican Kurt Daudt. After the 2016 election where Republicans gained even seats, Thissen stepped down as majority leader. paulthissen.com

Tim Walz: U.S. Congressman-1st Dist. Six term congressman from southern Minnesota. He very narrowly won against Republican Jim Hagedorn in the Trump wave election of 2016 and last year announced he would not run again for congress so he could launch his campaign for governor. Walz is a former high school teacher and a retired command sergeant major in the National Guard. walzflanagan.org

Keith Downey: Former RPM chair and former state representative from Edina. Keith took over the chairmanship of the RPM after it suffered a huge multi-million dollar deficit under previous chair Tony Sutton. Downey managed to raise the funds to pay down more than half of the party's debt in addition to orchestrating Republican legislative electoral victories in 2014 and 2016. downeyforgovernor.com

Jeff Johnson: Hennepin County Commissioner. Johnson was the RPM nominee in 2014 and lost in the general election to Mark Dayton. Ironically, he lost the precinct caucus straw poll in 2014 to former House Majority Leader Marty Seifert. Johnson is a fiscal and social conservative. johnsonforgovernor.org