(FOX 9) - The grass is starting to green up, the days are drastically longer and the itchy watery eyes have returned--no doubt it’s spring. And what a spring it has been… so far!

March felt more like a typical April and now we just completed the third warmest first week of April on record. While that has many of us thinking of flowers, plants and gardens, I wouldn’t get too carried away just yet. 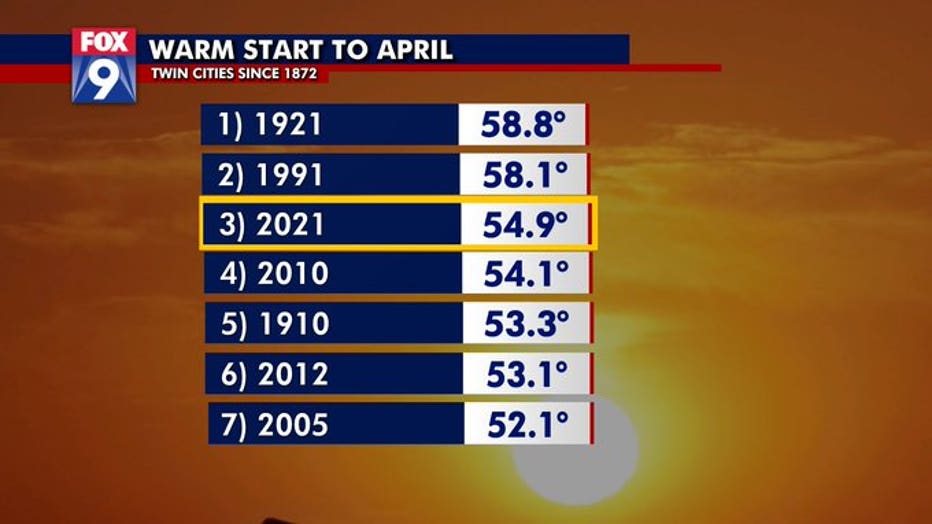 This was the third warmest start to April for the Twin Cities, running roughly 14° above average.

We’re just getting into the middle of April now, which means we have plenty of time to go to get more freezing temperatures, and yes, even some snow. The white flakes may be a long shot from here on out, but that doesn’t mean we can’t cool off to plant killing temperatures even without the risk of precipitation. In fact, the average final freeze in the Twin Cities is right around May 1. For areas north of the metro, it’s even later, usually around the middle of May.

While we have certainly been warm in the Upper Midwest over the last week, it’s been the exact opposite in Alaska where they are experiencing some of their coldest weather in April in more than 70 years. And our upcoming pattern may try to tap into some of that going into next week.

Cold air spilling out of Alaska, Canada could bring below average temps to Minnesota next week

It's only early April and some below average temperatures look more likely next week as cold air spills out of Alaska and Canada, which would spell another widespread freeze for much of Minnesota.

Now, I’m absolutely not saying that we’ll get record cold…far from it. But if that’s the source region of our air by the middle of next week, I’d expect it to be below average at the very least. With average lows still near the freeze mark in most spots statewide, there’s a pretty good bet that below average numbers would bring a widespread freeze to the area.

This is why I often say that you don’t want it to get too warm too quickly in the spring because it can lead to early season planting and early season growth, and then an "average" freeze can do some significant damage. While I’m absolutely not a botanist, and I’m sure there are some varieties of flowers, plants and vegetables that can go into the ground right now, I would tell the "typical" amateur gardener to wait a little while longer.