Monday's forecast: Sunny with highs in the low 60s

(FOX 9) - Last week we saw highs in the 90s, and now this week, the first fall freeze is likely for at least some of us. Welcome to Minnesota! Now, it may seem a bit early for this, but it's not. It probably just feels that way because of how incredibly warm the first two-thirds of September was. For areas generally north of Interstate 94, this is right on target. 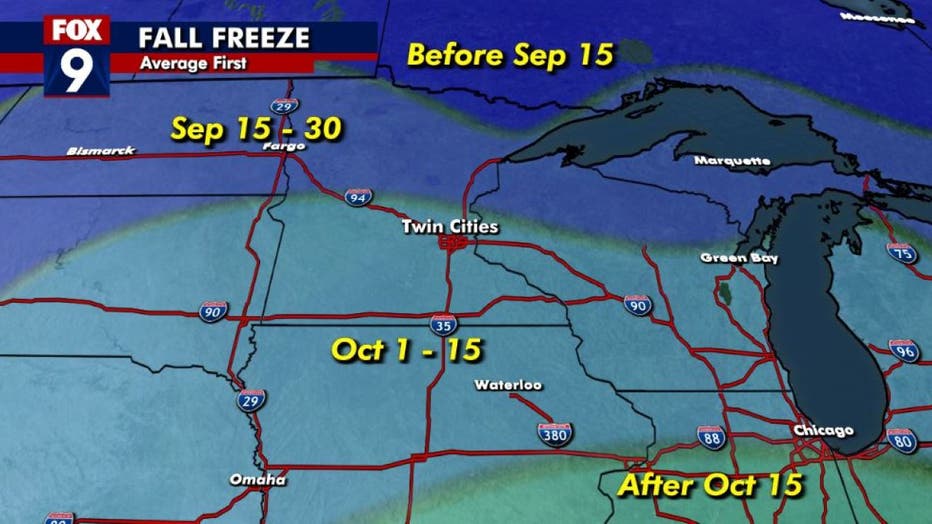 The average first fall freeze in Minnesota and western Wisconsin.

For areas north of the Twin Cities, the average first fall freeze is actually before we get to October, which of course is this weekend. So, any sort of frost or light freeze would actually be right on target and would spell the end of the growing season for these zones.  For the southern half of the state though, as well as the Twin Cities core, the first freeze usually holds off until the first or second week of October. However, a late September frost, even for the 'burbs, isn't unusual.

So why the big change? Well, you can actually thank the recently active Atlantic hurricane season. As Fiona curved just east of the Eastern Seaboard and made landfall in Canada, it brings a surge of warm air and moisture to the polar regions of the Northern Hemisphere. Well, with so much energy pushing northward, it forces cooler and drier air masses out of the poles and shoves them southward. This often leads to cooler and very quiet conditions on either side of the area where this tropical system landed. That would lead to cooler and drier conditions across the central and eastern U.S. as well as parts of western Europe. Something similar is likely when Ian eventually weakens and gets sucked northward toward the North Pole. That's the major reason why the upcoming several days of weather around here will likely be quiet and sunny.

Exactly how chilly we get Wednesday morning remains to be seen. However, it does look like much of the area has a moderate to high probability of some frost, with some areas experiencing the first freeze of the season.

Here's a look at expected morning lows, keeping in mind that these may change a little in the 36 hours ahead: 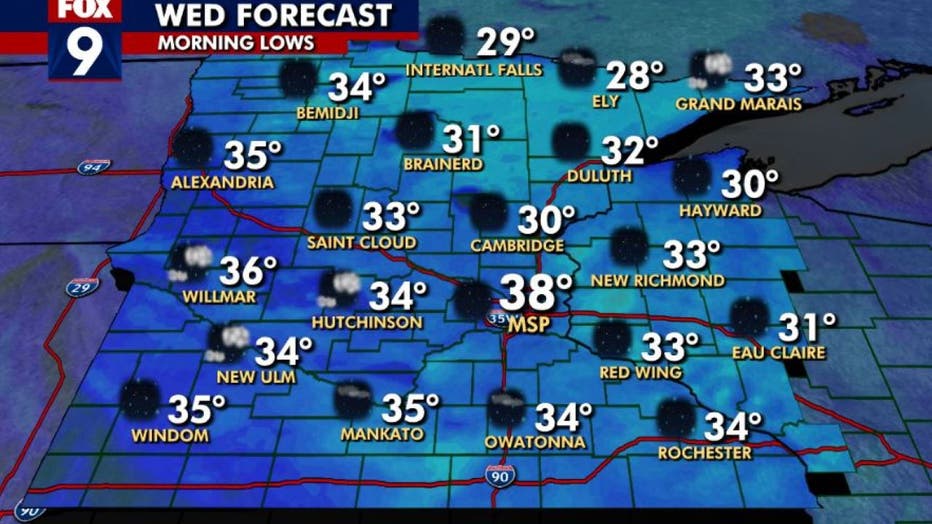 The forecast for Wednesday morning.

Widespread frozen conditions are becoming more likely in our northern and eastern zones, while the west and south will likely see at least some frost. For the Twin Cities, the core will likely be too warm. However, some frost looks pretty likely for the 'burbs, especially the outer ring like Forest Lake, Rosemount, Monticello, Carver, and all similarly placed cities.

So, if you want to keep those plants and flowers a little longer, you will probably have to cover them up Tuesday night.