The Minnesota Vikings are in the thick of installing new offensive and defensive systems during Week 2 of organized team activities at TCO Performance Center.

MINNEAPOLIS - The offseason talk for the Minnesota Vikings has been about a change in culture and leadership, both in the front office and in overhauling the coaching staff.

Rick Spielman and Mike Zimmer are gone. They’ve been replaced by Kwesi Adofo-Mensah and Kevin O’Connell. From Day 1, the regime has preached communication, collaboration and everyone from players to coaches to front office staff having a voice. Players have said through the offseason there’s a different vibe at TCO Performance Center. They’re having fun again, it feels lighter compared to some tense times under Zimmer.

That can happen when a team that has the talent misses the NFC Playoffs two straight seasons, and three out of four years. After the Vikings’ fifth workout of organized tam activities on Tuesday, quarterback Kirk Cousins largely downplayed the shift in energy, which seems a lot more positive.

"There’s obviously changes but I wouldn’t say it’s a big deal that I would be focusing on," Cousins said.

He said he still carries butterflies to practice every day, out of high standards and expectations for himself. The team gets about a 45-minute break between meetings and practice, and he spends most of that time in the quarterback room drawing up plays.

He won’t know if they’ll work until he gets on the practice field. 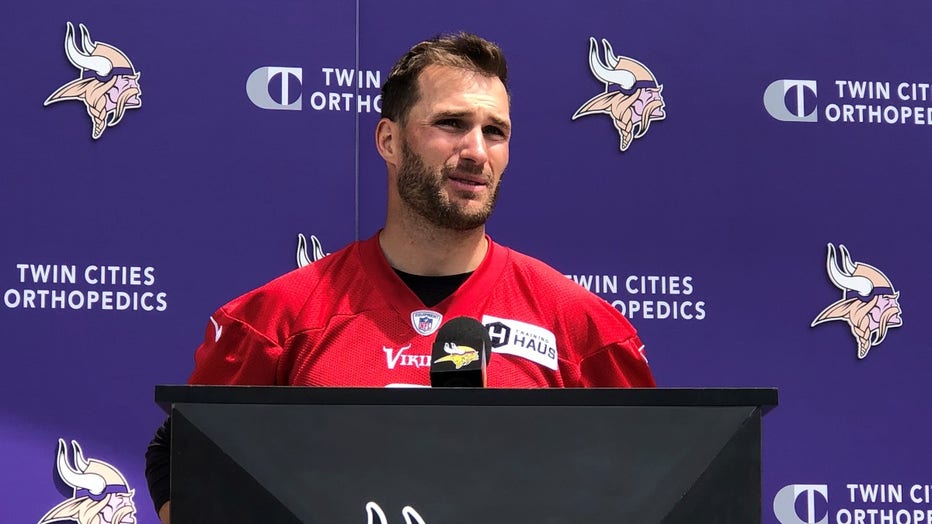 Kirk Cousins spoke with reporters after practice Tuesday as the Minnesota Vikings are in Week 2 of organized team activities at TCO Performance Center.

"I’ve got butterflies in my stomach when I go to practice. There’s still a tension, you’re being filmed, you’re being evaluated, you’re trying to take another step as a player. You always have a deep care and concern for what you’re doing and as a result, you feel that tension in a good way. I don’t think that’ll ever go away, and I think it’s never needed to come from a coach," Cousins said. "I think it’s something that comes from within to put a high standard on your performance and expect that out of yourself at all times."

Cousins is in his fifth season with the Vikings, and is on his fifth offensive coordinator. This year, it’s Wes Phillips. With an offensive-minded head coach in O’Connell now in place, there’s new terminology to learn. The concepts are similar to what O’Connell brought from the L.A. Rams, but there’s new wrinkles.

So how does Cousins learn them? Flash cards. He says mastering them on his own time allows him to play with his instincts on the field.

"You feel like an 8th grader studying for a quiz in school the next day with the way you go home each night and study," Cousins said.

DALVIN TOMLINSON: ‘SKY IS THE LIMIT’ FOR VIKINGS DEFENSE

Ed Donatell is the new leader of the Vikings’ defense, and it will have a new look with a 3-4 scheme. They added talent through free agency and the NFL Draft, and return veterans from a unit that at times was one of the best in the NFL under Zimmer.

"I think the sky is the limit. Just with all the pieces we have, all we have to do is continue to come together and just become one unit," said defensive tackle Dalvin Tomlinson, who had 39 tackles and 2.5 sacks in 16 starts last season.

Installing a new defense, they have to crawl before they can walk. The work is being done in meetings, the film room and walkthroughs. Donatell won’t make any judgments until the pads come on.

"This is the learning time. We do a little bit of 7-on-7 where we pick up the speed. But until the pads come on, we don’t make judgments. Really the evaluation starts when the pads come on," Donatell said. "Right now, it’s education and building a cohesiveness with your unit."

MATT DANIELS: ‘THERE WILL BE A FULL KICKER, PUNTER COMPETITION’

The Vikings have veterans in Greg Joseph and Jordan Berry back at kicker and punter, but they’re not guaranteed anything heading into the 2022 season. The team brought in Oklahoma kicker Gabe Brkic, and Tulane punter Ryan Wright to push the competition.

Both Joseph and Brkic kicked at Tuesday’s practice. Joseph converted a 39-yard field goal in a two-minute situation that would’ve been a game-winner. Joseph also made five of six during drills in a swirling wind at TCO Performance Center. He converted from 33, 39, 43, 47 and 54 yards.

Brkic went 3-for-3 on attempts from 33, 39 and 43 yards out. Special teams coach Matt Daniels is going to continue putting them under pressure.

"There will be a full kicker competition and punter competition. Competition makes each other better," Daniels said. "We want to try to create as many game-like situations in practice as we can, but also pressure situations. We’ll see how guys respond to it."

Joseph got his first real chance to be a full-time kicker last season. He finished 33-of-38 on field goals, and 36-of-40 on extra points. His most noticeable miss was at Arizona in Week 2, that would’ve given the Vikings a walk-off win.

Daniels said he’s been working with Joseph on his mental approach to the game throughout offseason workouts.

"The kicker position is typically the loneliest one on the football field, right? There’s not too many people you can rely on or point the fingers to other than yourself," Daniels said. "I try to build as many game-like situations in practice as we can to help build that mental toughness."

The Vikings have one more week of OTAs before a three-day mandatory minicamp in early June. They’ll then get about five weeks off before starting training camp.