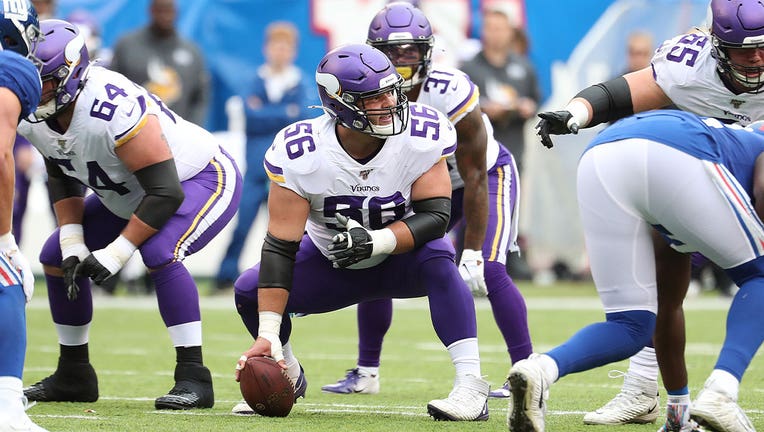 Garrett Bradbury #56 of the Minnesota Vikings in action against the New York Giants during their game at MetLife Stadium on October 06, 2019 in East Rutherford, New Jersey. (Al Bello / Getty Images)

MINNEAPOLIS (FOX 9) - Vikings center Garrett Bradbury may miss Sunday's game at the Ravens after being placed on the COVID-19 reserve list on Thursday.

The third-year center has started all seven games this season for Minnesota. The team would turn to backup Mason Cole in Bradbury's absence. Cole is in his first year with Minnesota after three seasons with the Cardinals.

Bradbury, who the Vikings say is vaccinated, would have to return two negative tests 24 hours apart to be eligible for Sunday's game. With the team on the road, that seems to be an unlikely scenario.

Despite potential close contact with Bradbury, Kirk Cousins was practicing on Thursday for the Vikings.

With Bradbury on reserve, the Vikings have added tight end Luke Stocker to the active roster and signed defensive end Nate Orchard to the practice squad.