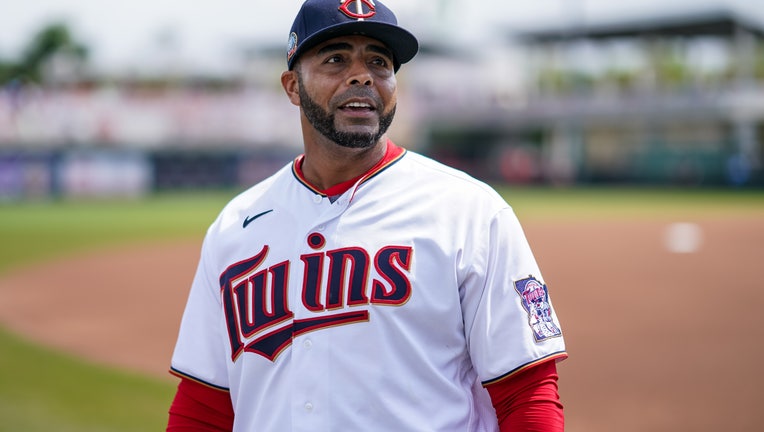 FORT MYERS, FL- MARCH 09: Nelson Cruz #23 of the Minnesota Twins looks on prior to a spring training game between the Minnesota Twins and St. Louis Cardinals on March 9, 2020 at Hammond Stadium in Fort Myers, Florida. (Photo by Brace Hemmelgarn/Minne

MINNEAPOLIS - The Minnesota Twins announced Wednesday that slugger Nelson Cruz has been named a finalist for the ESPN Muhammad Ali Sports Humanitarian Award.

The award is given annually to an athlete whose continuous, demonstrated leadership has created a measured positive impact on their community through sports. The candidates must embrace the core principles that Muhammad Ali embodied, including confidence, conviction, dedication, giving and respect. The winner, which will be announced during the ESPY Awards on June 21, will get a $100,000 grant from ESPN to give to a charity related to the award-winning efforts.

"To be recognized by ESPN and Muhammad Ali, it’s an honor and it’s something that makes me and my family proud. Just a blessing and an exciting day for me," Cruz said Wednesday via conference call.

All finalists will get a $25,000 grant to direct to their charity.

Cruz, a six-time All-Star, has gone above and beyond to transform the safety and welfare of his home, the Las Matas De Santa Cruz, in the Dominican Republic. With Cruz’s work, the town has a fire engine and ambulance to get people to the hospital, nearly an hour away. Cruz helped build a new police station that was originally a plywood shack structure, and donated a motorcycle to the police force. Officers previously had to walk to calls.

Cruz also brings dentists and optometrists to his hometown’s clinic to provide check-ups, medicine and eyewear. His work has enabled more than 1,200 people to get evaluated and treated. He’s also bought wheelchairs, crutches, walkers and canes to elderly and disabled people.

"In a country like mine where you have a lot of needs, it’s just huge to be able to impact and go and see what the real world and how those people eat on a daily basis," Cruz said.

He established the Boomstick23 Foundation, which laid the groundwork for a new education and technical center to help young people advance their employability by learning the carpentry and electrical trades, and how to use farmland better to produce crops. Cruz also has a Healing Venezuela initiative, which helps 2,000 Venezuelan newborns annually to receive nutrients they need to stay alive.

"It’s definitely something that means a lot to me and my family, my foundation. I think over the years we’re working just to make a possible impact on kids through sports and education, even just helping my community with whatever the need might be. Definitely something that makes you work harder and makes you do ore if you can do more," Cruz said.