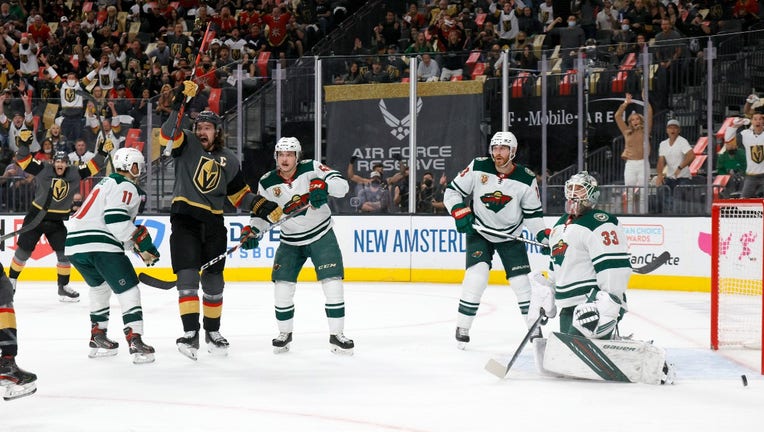 MINNEAPOLIS - There was no Game 7 magic for the Minnesota Wild Friday night in Las Vegas. The Wild’s season came to an end in a 6-2 loss to the Golden Knights in front of more than 12,000 fans at T-Mobile Arena, led by a hat trick for Mattias Janmark.

The Wild lost defenseman Jonas Brodin two minutes into the game to an upper body injury after a hard hit. Ryan Suter had his face smashed into a post, and Joel Eriksson Ek left the game briefly with a knee injury in another physical game this series.

"Any time you get eliminated from the playoffs, it’s never a good feeling. I think we all firmly believed with where we were a handful of days ago down 3-1, making this thing 3-3, we all firmly believed that we were going to win this game tonight," said forward Zach Parise, who scored Minnesota's first goal Friday. "They’re all brutal, any time you’re eliminated from the postseason, it’s not fun."

The Wild rallied from a 3-1 deficit to force Friday's Game 7, but couldn't finish off the series. It's their fifth straight first round exit from the Stanley Cup Playoffs.

"You get to a Game 7 and obviously one team wins and one team loses. Our effort was there, we competed our butts off. We did that from Day 1, Game 1. Our resilience, the way that the group conducted themselves all year, they should be extremely proud of themselves," Wild coach Dean Evason said after the loss.

Nicolas Hauge gave the Golden Knights a 2-1 lead at 2:05 of the second with a goal off a faceoff. Kirill Kaprizov tied it 2-2 with a power play goal off an assist from Mats Zuccarello. Vegas answered with goals from Max Pacioretty, playing in his first game of the series, and Zach Whitecloud to take a 4-2 lead after two periods.

Whitecloud’s goal came after Suter appeared to take a high stick that drew blood, which would’ve been a four-minute power play for the Wild, but the call never came. The Golden Knights out-shot the Wild 35-21 for the game, and had a 41-21 advantage in face-offs won.

"They took advantage of their key moments, and we didn’t. Likely the difference in the game," Evason said.

The Golden Knights sealed the win on Janmark’s second goal of the night at 12:36 of the third period, which gave Vegas a 5-2 lead. Minnesota’s other goal on the night game in the first period from Parise, who tipped a Suter shot on his backhand past Marc-Andre Fleury.

Janmark finished off a hat trick with an empty-net goal at 16:53 of the third, and the celebration was on at T-Mobile Arena. The Wild will head back to St. Paul to begin their offseason, while the Golden Knights advance in the Stanley Cup Playoffs to take on Colorado Sunday night.

The Wild hasn't won a playoff series since 2015. The franchise now looks to the off-season, and how they can find a way to get deeper into the playoffs.

"We got ourselves to a Game 7, we just didn’t push through. We need to learn from this experience right now and obviously going forward, and we will," Evason said.