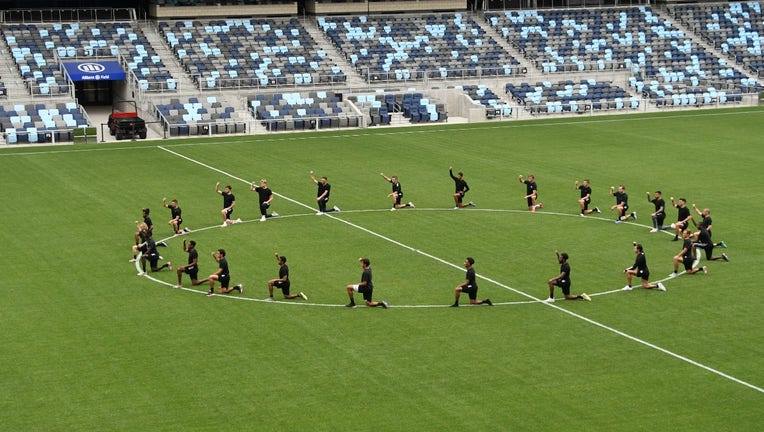 MINNEAPOLIS - Minnesota United held a full team training session last Friday, and it was anything but a typical practice.

The Loons were back at Allianz Field for the first time in more than three months, after Major League Soccer suspended play due to the Coronavirus pandemic. Minnesota United was off to a 2-0 start and poised to open the second season at Allianz Field when play was halted on March 12 due to Covid-19.

Players were back on their home field, and they were more than excited about it.

“Obviously being here for the first time after all the things that happened was an unbelievable feeling. We can’t wait to play the games here, I don’t know with fans or not, but it was a great feeling to be back,” Jan Gregus said.

“I think you could tell by the players’ level of excitement to get back out on the grass. The pitch is in magnificent condition, but you saw the extra bit of zip in the legs,” Loons’ coach Adrian Heath said.

One of the most powerful moments of the training session had nothing to do with soccer. Players, led by Ike Opara, gathered around the center circle at midfield. They took a knee and raised their right fists in the air, showing a unified front to fight racism and social injustice in the wake of George Floyd’s death in Minneapolis.

Former Minneapolis police officer Derek Chauvin is facing murder charges in Floyd’s death, and the three other officers who responded to 38th and Chicago on Memorial Day are charged with aiding and abetting murder.

The days that followed featured civil unrest around the Twin Cities.

Athletes across the world are doing their part to speak out on racism and social injustice, and on Friday, Loons’ players wore “Black Lives Matter” shirts at training. Minnesota United also closed its business operations on Friday, in observance of Juneteenth.

For Heath, the most important part about taking a knee on Allianz Field was that it was a player-led initiative.

“I’m really proud of the way our players have responded to what’s gone on in the last few weeks here in Minnesota. We haven’t had to prompt them, they’ve been out there marching, they’ve been out there showing their solidarity with everybody and it doesn’t surprise me that they organized that today,” Heath said. “We all think it’s time for change and hopefully this is the beginning of it.”

Minnesota United posted a 20-second video of the moment, with a drone capturing the players kneeling as it slowly flew away from midfield. The video posted to Twitter had the caption, “I can’t breathe… Those were some of the final words Floyd said as Chauvin had his knee on Floyd’s neck. After several minutes on the ground, handcuffed and unarmed, Floyd lost consciousness. He was taken to Hennepin County Medical Center, where he was pronounced dead.

For the Minnesota United players, it’s about doing what they can to create change and showing solidarity. The Loons have 14 players of color on the current roster.

“It’s very important, I think. It just shows what we stand for in the club and in the culture and community. I think and I hope for that we all want the same thing, and that’s why we showed this,” Gregus said.

The Loons and all other MLS teams will soon be heading to Orlando, Fla., for the MLS is Back Tournament. Games without fans are scheduled to start July 8.