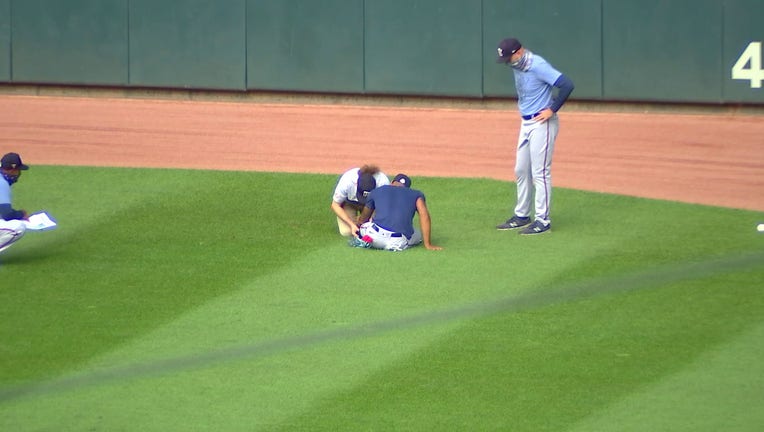 Byron Buxton had to be carted off Target Field Monday night after injuring his left foot chasing down a fly ball hit by Nelson Cruz.

MINNEAPOLIS - It appears Minnesota Twins center fielder Byron Buxton might have avoided a major injury after having to be carted off Target Field Monday night during an inter squad scrimmage.

The Twins announced Tuesday Buxton is listed as day-to-day with a mid-foot sprain in his left foot. Buxton was tracking a Nelson Cruz fly ball Monday night when he went down after taking what Rocco Baldelli labeled a “misstep.” Buxton was on the ground for several minutes before being helped onto a cart that took him off the field. He didn’t put any weight on his left side leaving the field.

Tests and imaging done on Buxton's left foot Monday night and Tuesday didn't show any structural damage. Perhaps the most encouraging news was that Buxton was not wearing a brace or any type of boot on his left foot at Target Field on Tuesday.

"It was a good day today. He was in good spirits today as was everybody else upon hearing that news. Hopefully we see him out there soon," Baldelli said Tuesday night.

Buxton was impressing early in Twins Summer Camp after arriving late due to the birth of his second child, Blaze. On consecutive nights, Buxton had doubles in scrimmages. Baldelli said they're going to take it day by day with Buxton.

"We’re going to make sure that Buck can get out there and run like himself. Buck would play with probably anything and say that he was good. Being the type of player that he is, we want to make sure going into the season that he’s OK," Baldelli said.

Buxton missed the last month and the playoffs of last season after having to have shoulder surgery. He got injured after crashing into the wall trying to catch a fly ball in Miami last August. In 87 games last season, Buxton hit .262 with 10 homers, 30 doubles, 46 RBI and stole 14 bases.

Buxton also dealt with a wrist injury, and a concussion last season. In five major league seasons, Buxton has played more than 100 games just once. He played in just 28 MLB games in 2018.

The Twins open the 2020 60-game season July 24 in Chicago against the White Sox. They’ll face the Cubs in an exhibition on July 22.

The question for Baldelli is will Buxton be out in center field when the Twins start the season in Chicago?

"I would hope that we get the opportunity to test Buck out and know what we have by Opening Day. We’re not going to commit to anything, there’s no way to really know anything for sure. He was definitely moving around better today and feeling better than he was yesterday," Baldelli said. "There’s definitely a good amount of hope that Byron will be out there on Opening Day, but we’re going to wait and see how he feels."