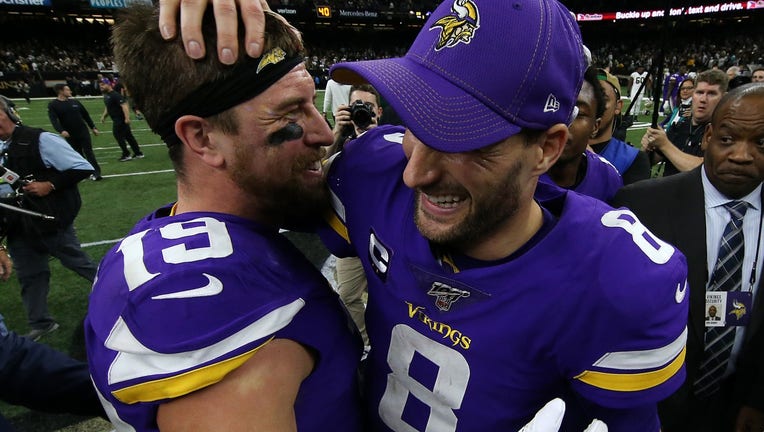 Kirk Cousins #8 of the Minnesota Vikings celebrates with Adam Thielen #19 after defeating the New Orleans Saints 26-20 during overtime in the NFC Wild Card Playoff game at Mercedes Benz Superdome on January 05, 2020 in New Orleans, Louisiana. ((Photo by Chris Graythen/Getty Images))

MINNEAPOLIS - The importance of leading the Minnesota Vikings to a Super Bowl is not lost on quarterback Kirk Cousins.

It’s a franchise that hasn’t been to the biggest game in sports since 1976. The Vikings were one game away from the Super Bowl in 2017, 2009, 2000 and of course, 1998. The loss at Philadelphia in 2018 was especially painful, after the Minneapolis Miracle and being one win away from a virtual home game for the Super Bowl.

Vikings QB Kirk Cousins ready to suit up for the season

Minnesota Vikings quarterback Kirk Cousins gave a look ahead to the upcoming season and also wished the best for his former teammate Stefon Diggs.

The Vikings have lost four straight NFC title games, and they’re 0-4 in Super Bowls. Cousins, speaking Tuesday via Zoom for the first time since agreeing a two-year contract extension, wants to be the quarterback to bring the Vince Lombardi Trophy to Minnesota.

“We know how much this team means to the fan base, to the people of Minnesota and we’re going to do all we can to deliver a championship. I do know that whoever the quarterback is that delivers a world championship to the Minnesota Vikings is going to be welcome in the state of Minnesota for the rest of their lives,” Cousins said.

Keeping Cousins in Minnesota was one of the first things the Vikings did before the NFL’s league year started and free agency began. The two sides came to an agreement during the legal tampering period.

Cousins agreed to an extension worth $66 million guaranteed, including a $9.5 million base salary in 2020 and a $21 million cap hit. It gave the Vikings salary cap space, and Minnesota has plenty to replace between the Stefon Diggs trade and at least eight departures from the defense.

Cousins called the extension “a no-brainer.”

“I think it’s a win-win. The Vikings did a great job of finding a way to make it a win-win. It’s great to be able to create some cap space for this year and to be able to solidify that I and my family can be back in Minnesota for another couple of seasons, and hopefully beyond that,” Cousins said.

Cousins also spoke in detail Tuesday for the first time about Diggs’ departure to the Buffalo Bills. The Vikings received four draft picks for Diggs, including the No. 22 overall pick this year, which gives Minnesota two first-round picks in the NFL Draft.

Diggs made headlines during the 2019 season after missing the first day of practice following a Week 4 loss at Chicago. He returned the following day, said he was out sick and the team did not list him on the injury report. He was fined as much as $200,000 by the team and at the time, when asked about trade rumors, he said “I think there’s some truth to all rumors.”

“It’s a unique dynamic. It became apparent that he wanted to play elsewhere and I think it was smart of the Vikings to grant him that opportunity. It wasn’t a mystery and that’s OK,” Cousins said. “I wish him really well. He’s a special player, we now have to find a way to move forward.”

In two seasons with Cousins, Diggs made 165 catches on 243 targets. He had consecutive 1,000-yard seasons and 15 touchdowns. Diggs had the best statistical year of his career last season, averaging 17.9 yards per catch.

He made plays and became the primary downfield threat, but he also wasn’t afraid to voice his frustrations with teammates. He even had on-field tantrums in games, throwing his helmet on the sideline.

“He was electric. The guys who have those movement skills don’t grow on trees,” Cousins said.

After the trade, Cousins sent Diggs a text to wish him the best moving forward. He also said Diggs is as good as any receiver he’s ever played with, mentioning Adam Thielen, DeSean Jackson and Pierre Garcon in that group.

“He’s elite, so I just wanted to affirm him and thank him. It sounds cliché, but I’m as good of a quarterback as the guys around me and specifically as the people I have to throw to,” Cousins said. “There were a lot of games where his talent makes an enormous difference. I just wanted to let him know that.”

Cousins' job, now without Diggs, is to take the Vikings' offense to the next level after earning his first career playoff win with Minnesota last season.