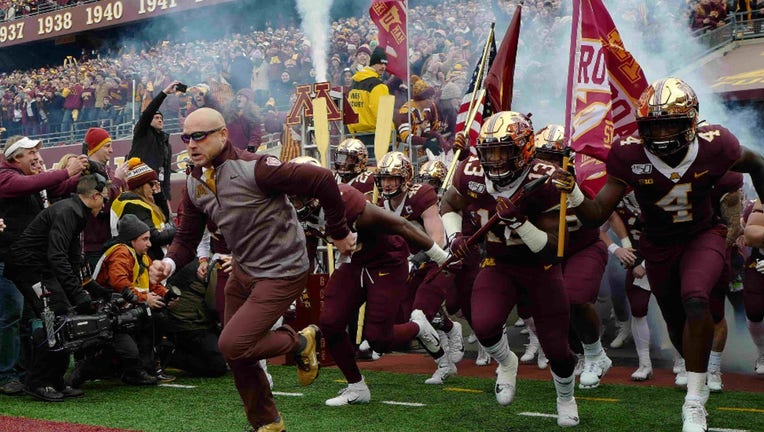 Head coach P.J. Fleck of the Minnesota Golden Gophers and his team take the field against the Penn State Nittany Lions at TCFBank Stadium on November 9, 2019 in Minneapolis, Minnesota.  ((Photo by Adam Bettcher/Getty Images))

MINNEAPOLIS - The University of Minnesota football team on Wednesday announced a revised schedule for the 2022 season.

The Gophers will still open with three straight home against New Mexico State, Western Illinois and Colorado at Huntington Bank Stadium. Minnesota will then be on the road for three of its first four Big Ten games.

The Gophers were originally scheduled to host Iowa in late September, but now they’ll head to Michigan State on Sept. 24. Minnesota will host Purdue for Homecoming on Oct. 1, then have a bye week before traveling to Illinois and Penn State.

In what seems to be an annual tradition, the Gophers will end the season against rivals Iowa and Wisconsin. Minnesota will host Iowa on Nov. 19 for Floyd of Rosedale, then travel to Camp Randall Stadium to end the regular season at Wisconsin on Nov. 26, the Saturday after Thanksgiving.

PJ Fleck earned his second win over the Badgers in five seasons in 2021, and has yet to beat Kirk Ferentz and the Hawkeyes.

The Gophers finished the 2021 season 9-4 after beating West Virginia 18-6 in the Guaranteed Rate Bowl. In five seasons with the Gophers, Fleck is 35-23 overall, 21-22 in Big Ten play and the program has won three bowl games.

Here’s a complete look at the 2022 schedule. Game times will be announced at a later date.