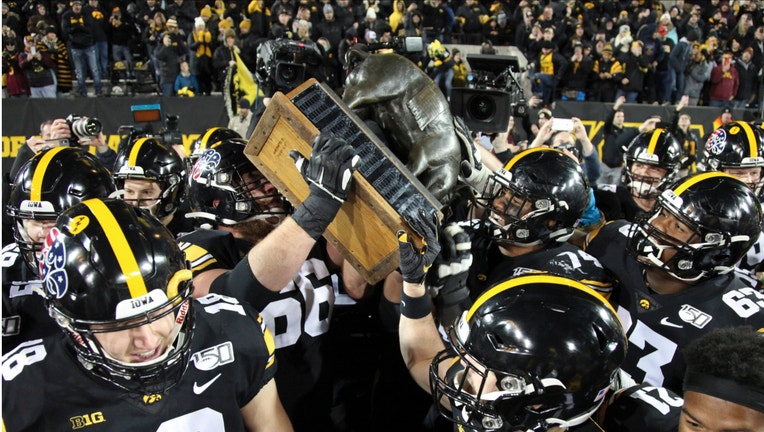 Offensive linemen Levi Paulsen #66 and Tristan Wirfs #74 of the Iowa Hawkeyes lifts the Floyd of Rosedale trophy after the win over the Minnesota Gophers on November 16, 2019 at Kinnick Stadium in Iowa City, Iowa. ((Photo by Matthew Holst/Getty Images))

MINNEAPOLIS - It’s pig week at the University of Minnesota, and the Gophers are tired of hearing about losing to Iowa.

Minnesota hosts Iowa under the lights Friday night at TCF Bank Stadium in the battle for Floyd of Rosedale. It’s another one game championship season for P.J. Fleck, and it’s another chance for players from Minnesota to beat a rival.

Gophers’ fans are likely eating a little more bacon, or some other type of pork this week. It’s a rivalry week, and the Gophers are looking to build off a road win over Illinois. Facing Iowa is a game that gets circled when the schedule comes out every year. Fleck addressed the rivalry and winning back Floyd of Rosedale with his team Monday night.

Minnesota has the Victory Bell with Penn State, the Broken Chair with Nebraska, the Little Brown Jug with Michigan, Floyd of Rosedale this week and Paul Bunyan’s Axe with Wisconsin. Fleck is in the middle of his fourth season with the Gophers, and he’s 0-3 against Iowa. He got a taste of a rivalry win two years ago. When the team arrived back to campus the night after a 37-15 victory over Wisconsin, fans flooded the football practice facility to celebrate and Fleck gave a speech like he had just won an election.

Paul Bunyan's Axe then went on a state-wide tour.

This week, the football facility on campus is littered with pig posters. The team says it’s time to keep Floyd of Rosedale home.

“It means a lot, it’s huge. At the end of Friday night, somebody is going to walk away with that pig. We don’t just want it to be us, we obsess over it. We are going to do everything we can to get that pig,” Marshall native and offensive lineman Blaise Andries said.

Andries is one of five home state offensive linemen getting snaps this season. For him, Sam Schlueter, Conner Olson, Axel Ruschmeyer, Nathan Boe and the other Minnesotans who play for the Gophers, it’s personal.

“Growing up in Minnesota, everybody hears about the rivalry with Iowa and other teams that we have rivalry trophy games with,” said Hopkins alum and rush end Boye Mafe. “It means a lot to Minnesota kids.”

Last year, Minnesota went to Iowa 9-0 after a historic win over Penn State. The Gophers were ranked No. 8 in the country, just outside the College Football Playoff. They left Kinnick Stadium with a 23-19 loss, and their Big Ten West title hopes were put on hold for another year after a loss to Wisconsin two weeks later.

The Gophers have lost five straight to the Hawkeyes, which is Iowa’s longest win streak in the rivalry. Four of those games came down to one possession. Minnesota's last win came in 2014, when Mitch Leidner, Maxx Williams and David Cobb were the stars in a 51-14 victory.

Iowa has a new quarterback in Spencer Petras, who is averaging 216 yards per game, has two passing touchdowns and three interceptions through three games. Tyler Goodson leads the run game at 77.7 yards per game and three touchdowns. Tight end Sam LaPorta is the leading receiver, but Ihmir Smith-Marsette is the big-play threat. He missed last week’s game against Michigan State after an arrest for DWI.

Iowa’s defense is led by linebacker Nick Niemann, who has a team-high 25 tackles. Jack Koerner has 23 tackles and two interceptions, and Daviyon Nixon has 21 tackles and two sacks. The Hawkeyes are third in the Big Ten in scoring defense, allowing 17.7 points per game. They’re third in total defense, allowing 315 yards per game. They’re also the top rushing defense in the Big Ten, and they’ll face the league’s top running back in Mohamed Ibrahim, who has gone for more than 200 yards two straight games.

When it’s rivalry week, the stats go out the window.

“These rivalry games are going to be close, so you’ve just got to come and be ready to play and compete,” defensive back Coney Durr said.

The Gophers want to keep Floyd of Rosedale home, but they’re taking the same approach as any other game. It’s a one-game championship season, while it’s also pig week.

“I think at the end of the day it comes down to going 1-0 in this Iowa season. Not really worried about what happened last year, anything like that. Doing everything we can to go 1-0 this week,” quarterback Tanner Morgan said.