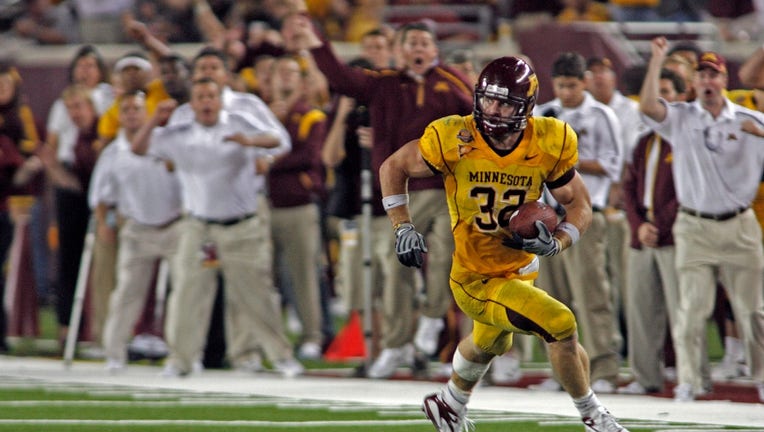 Nate Triplett headed for the end zone with the winning touchdown after picking up an Air Force fumble in the 4th quarter.  ((Photo by Marlin Levison/Star Tribune via Getty Images))

MINNEAPOLIS - Former Minnesota Vikings linebacker Chad Greenway went to social media Monday morning with a plea to help out one of his past teammates, now in a battle for his life.

Nate Triplett played linebacker for the University of Minnesota and was drafted in the fifth round by the Vikings in 2010. In the first game at what is now Huntington Bank Stadium, Triplett recovered a fumble and returned it 52 yards for a touchdown as the Gophers held off Air Force 2013.

Greenway started a GoFundMe campaign for his former teammate, who is now battling brain cancer. Triplett got married to his wife, Jessica, in November 2020, and the couple has two daughters. In February of 2021, Triplett went to the emergency room with what he thought were minor medical issues. An MRI showed he had a large mass inside his brain stem.

Last June, Triplett, a Delano native, appeared on the Fox 9 Town Ball Tour and opened up about his battle with cancer.

A biopsy confirmed the tumor was cancerous, and also showed it couldn’t surgically operated on. Triplett had to start radiation and chemotherapy.

Triplett is unable to work while he battles the disease, so Greenway started a campaign to help with paying for medical bills, treatments, care and family expenses.

"This is when we need to rally around Nate, Jessica, and the girls and do what we can to support them when they need it most. We need them to focus on Nate’s fight and caring for their girls; let's be part of their team and alleviate some of their stress," Greenway posted.

If you're interested in donating to help the Triplett family, here's how you can.