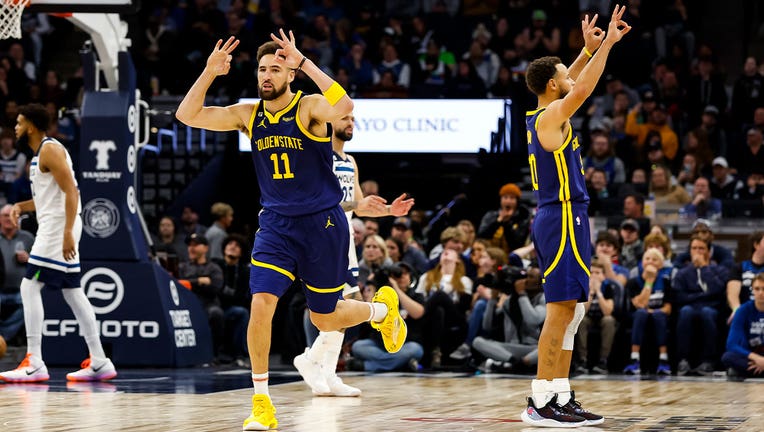 Klay Thompson #11 and Stephen Curry #30 of the Golden State Warriors celebrate a three-point basket by Thompson against the Minnesota Timberwolves in the fourth quarter at Target Center on November 27, 2022 in Minneapolis, Minnesota. The Warriors def (David Berding / Getty Images)

MINNEAPOLIS (AP) - Stephen Curry had 25 points, 11 rebounds and eight assists, Jordan Poole pitched in 24 points off the bench and the Golden State Warriors used a 47-point first quarter to spark a 137-114 victory over the Minnesota Timberwolves on Sunday.

Draymond Green had his first double-double of the season with 19 points and 11 assists for the Warriors. They have won five of their last six games since a team meeting Green facilitated in response to a sluggish start.

Green was the catalyst for this win, too.

"I've said for years Draymond is kind of the heartbeat of our team," coach Steve Kerr said.

Klay Thompson went 5 for 8 from deep for 21 points and tied Joe Johnson (1,978) for 15th place on the NBA's career list for 3-pointers, helping the Warriors raise their perplexing road record to 2-9.

Andrew Wiggins added 17 points against his old team, and the Warriors went 20 for 47 from 3-point range to move above the .500 mark for the first time in a month.

"We've been in a good groove lately," Wiggins said. "We're playing together."

The Warriors went 2 for 12 from 3-point range in the second quarter and still led by 20 points at the half, fueled by a faster tempo their offense has been at in recent weeks.

"Steve just told us to play for each other and to simplify things and when we do that," Thompson said, "we're the best in the world."

Anthony Edwards scored 26 points for the Wolves. They were outrebounded 47-31 and allowed their highest opponent score of the season.

"Our identity right now is super inconsistent, very Jekyll and Hyde," coach Chris Finch said. "We're not as physical or tough as I'd like us to be."

The Wolves finally came to life early in the fourth quarter with a 19-4 run that brought them within 10 points for their closest margin since midway through the first quarter. Curry, who had missed his first three shots after re-entering at the 8:25 mark, coolly swished a 3 from the wing out of a Warriors timeout to stem the tide and push the lead to 121-108.

Karl-Anthony Towns added 21 points and Jaylen Nowell had 16 points off the bench for the Wolves, whose bad habit of standing around on offense was more glaring against the passing-and-cutting Warriors. The Wolves lost for the second time in two days after their five-game winning streak was stopped with a loss at Charlotte on Saturday.

"Teams like Golden State, you can just see it in the way that they operate," Towns said. "It's a well-oiled machine. Everything they do has such cohesiveness to it, and that's because of the time they have spent with each other."

The Wolves played without Jaden McDaniels, their best perimeter defender who was sidelined by an illness, against a Warriors team that leads the league with 13 games of 30-plus assists and has long been the league king of the 3.

Wiggins started with a soaring left-handed slam off a lob from Green just 12 seconds into the game. The Warriors made 17 of their first 21 shots for a 40-17 lead, built by a 28-4 run over a 4:27 stretch that Nowell finally halted a 3. The 47-27 deficit after one quarter was the largest for the Wolves this season.

"Guys are in shape now and running deep to the corners, and it's really opening the floor up," Green said. "And then most importantly our defense has picked up."

Warriors: Golden State posted the second-highest first-quarter total in the NBA this season, according to Sportradar data. New York had 48 points in a loss to Oklahoma City on Nov. 13. ... The Warriors also ended a six-game losing streak to the Timberwolves since March 19, 2019.

Timberwolves: Austin Rivers drew his first start of the season in McDaniels' spot. He had five points in 29 minutes. ... Backup PG Jordan McLaughlin (calf strain) was sidelined for the third straight game and backup SF Taurean Prince (shoulder subluxation) was out for the second game in a row.

Warriors: At Dallas on Tuesday night.

Timberwolves: At Washington on Monday night.