Despite being in his 40s, Tom Brady is still at the top of his game after decades in the game.

No matter how many times Tom Brady and Patrick Mahomes might find themselves pressured by a pass rusher during the Super Bowl on Sunday, there’s an exceptionally strong chance that they’ll find a way to throw the ball before they’re thrown for a loss.

There are few quarterbacks in NFL history who’ve minimized sacks as much as Brady and Mahomes, one of the few ties that bind these superstars at opposite ends of their career arcs with significantly different playing styles.

Of all active quarterbacks in the league with a minimum of 1,500 pass attempts, Mahomes has the best career sack percentage (3.82), albeit with only three years as Kansas City’s starter. Drew Brees is second (3.83). Brady is third (4.69).

Expand the list to the all-time leaders, and Mahomes is fifth and Brady is 11th. The 43-year-old owner of six Super Bowl rings and three NFL MVP awards had the third-best sack percentage in the league (3.3) in 2020, his first season with Tampa Bay. The 25-year-old Mahomes was sixth (3.6).

"He makes our jobs easier if anything," said Andrew Wylie, who has moved to right tackle for the injury-altered Chiefs. "He’s extremely talented and has great pocket presence where, if he does get a little bit of pressure, he knows what to do to get around it. He gets that ball out fast, too, so we love blocking for Patty on this team." 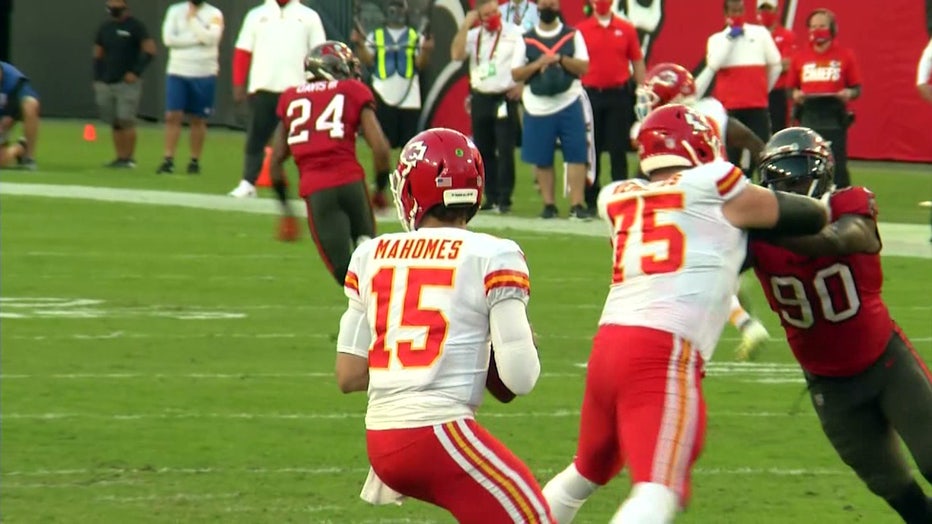 Whether Mahomes with his escape ability and improvisational skills or Brady with his savviness and vision, each of them have effectively used the art of avoiding the sack in their engineering of a potent offense on the cusp of a championship.

Brady didn’t miss a beat in his move from New England, meshing well enough with his new blockers and enjoying a wealth of down-field targets on the way to a Buccaneers scoring average that ranked third in the league.

"Tom does a really nice job of trying to put us as an offensive line, the guys protecting him, in a good position either from a protection standpoint or a concept standpoint," left guard Ali Marpet said, "or just from a communication standpoint so you have everybody on the same page. He does a nice job of a lot of things that all have a small role in him not getting hit."

Wide receivers have to win their routes and find their way open. Running backs have to know how and where to pick up a blitz. Quarterbacks need to be able to diagnose before and after the snap where the pressure is coming from. The coaching staff has a major role in this, of course, with the onus on the play caller to keep the team out of vulnerable situations and unfavorable matchups.

It’s not oversimplification, though, to declare that sack totals will spike in a hurry if the linemen aren’t able to sustain their blocks. The guys up front for the Bucs were immediately aware of their greater calling as soon as Brady signed.

The Bucs and Chiefs have also shown that it’s possible to field a top-tier offense and a championship-level team without the necessity of high draft picks or expensive free agents filling spots along the offensive line.

Both teams have devoted plenty of salary cap space to the position, to be sure. Still, the Bucs will play in the Super Bowl with only one first-rounder, rookie right tackle Tristan Wirfs. Marpet and center Ryan Jensen came from small colleges. New right guard Aaron Stinnie, who has replaced the injured Alex Cappa, went undrafted and was claimed off waivers from Tennessee last year.

The Chiefs have only one starter, center Austin Reiter, who was slated for the lineup before the season started, with their latest injury inconveniently coming to left tackle Eric Fisher in the AFC championship game.

"Man, it doesn’t matter if they know our names. We know what we do," Wylie said. "We’re going in there Sunday to take care of business, man. That’s the thought process that we all have."