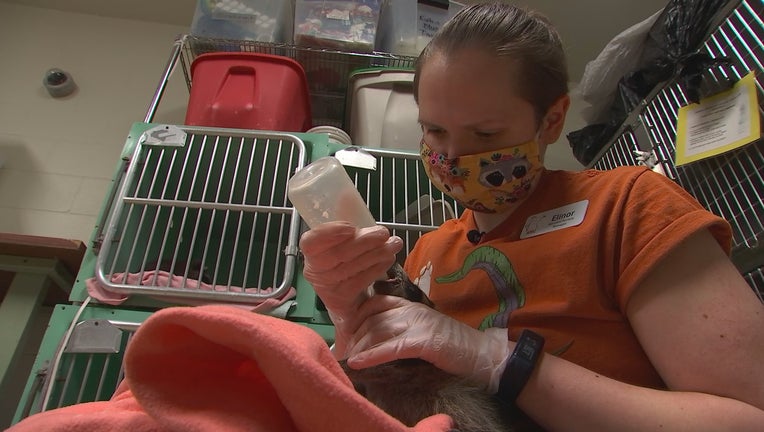 (FOX 9) - With Minnesota's stay-at-home order still in effect until at least May 18 and while Governor Walz has relaxed some rules for businesses, many are still spending more time at home and outdoors.

That means a big uptick in patients at the Wildlife Rehabilitation Center - a volume so large they are putting out a call for help.

When Renee Frisch discovered this baby squirrel in need Saturday during her walk, she knew right where to bring him

When Renee Frisch discovered a baby squirrel in need Saturday during her walk, she knew right where to bring him.

"It didn’t even move, it just sat there and looked at us," she explained. "I said we have to go to the Wildlife Rehabilitation Center."

Frisch is not alone in her thinking. The WRC is a busy place right now, and it seems COVID-19 has something to do with that.

Each wild animal that’s brought in gets a health check by a vet to see if they can be placed back in the wild or if they need to stay.

The WRC is trying to juggle all the additional animals -- about 200 more a day.

"It’s always kind of a rotating madness here, trying to figure out where we’re going to fit things," added Abbadie.

And they’re working with about half their usual staff, as they space people out to keep everyone healthy.

"This year is looking like it’s going to be even more of a record year for admits, and with even less people being able to work, that’s pretty hard," said Dr. Allison Carter.

Right now, there are over 900 animals in the building at the Wildlife Rehabilitation Center and they’re in desperate need for volunteers to help take care of all of them.

"I’ve been recruiting my friends and getting my younger cousin to work with me," said volunteer McKenna Nelson.

If there aren’t volunteers or interns joining the ranks right now, some tough decisions will have to be made.

"If we don’t have the number of people to care for these animals, then we would humanely euthanize the really sick animals and not be able to put the resources into them," said Dr. Carter. "So that’s a really hard decision that we don’t want to have to make."