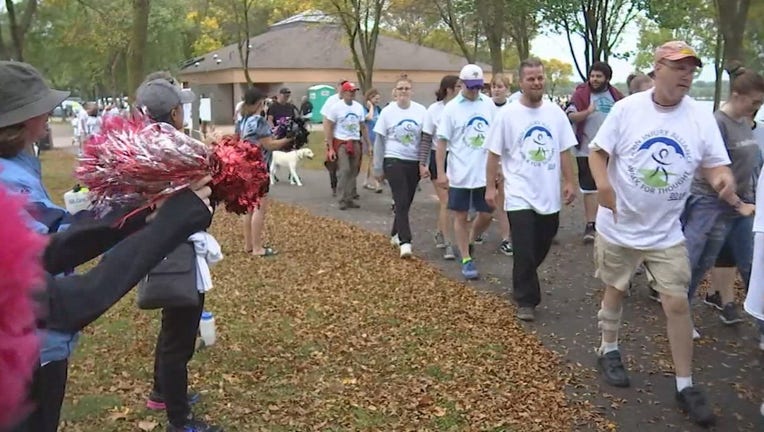 (FOX 9) - This year a brain injury will affect about 6,000 people in Minnesota. It’s why the Minnesota Brain Injury Alliance is holding its Walk for Thought next Saturday.

This year they need you more than ever.

This year a brain injury will affect about 6,000 people in Minnesota. It’s why the Minnesota Brain Injury Alliance is holding its Walk for Thought next Saturday.

"I would just tell people that there’s always someone there to help," said Becca Zarembinski.

Becca Zarembinski has been by the side of her brother Zach for a lifetime. It’s support he needed while playing football for Hill-Murray nearly three years ago. During one of the games he suddenly collapsed on the sidelines.

"So I had a traumatic brain injury, a blood clot basically formed in my head and blood and pushed down my skull," said Zach.

Doctors at Regions Hospital had to remove a section of Zach’s skull to relieve the pressure. It was a risky operation. He had the prayers and support of his family and his entire high school.

Weeks later, Zach was able to head home. His recovery was helped in part by Roger Moore at the Minnesota Brain Injury Alliance.

"Roger's my case manager," said Zach. "He has done a lot of anywhere from just giving me information to just being like a friend that helps you through it."

It turns out help is now a family affair. Becca is now a brain injury resource advisor as well.

"I think being a family member of someone who's had a brain injury, I understand from a different perspective and I understand the complex emotions that go into the recovery process," said Becca.

Part of that process is coming together. The annual Walk for Thought is Saturday, Sept. 25. It’s an event that doesn’t just raise money for the Minnesota Brain Injury Alliance, it provides a way survivors to connect.

The pandemic has forced the walk to go virtual this year. That means supporters are encouraged to walk on their own.

"We're really encouraging folks in their own neighborhoods and their own teams and families or whatever they want to do that, to come together and really create that awareness and sense of community within each of their own pods," said David King of the Minnesota Brain Injury Alliance.

Zach and his family have their own team: ZZ Strong. They know every team counts.

"And I think that for our family, at least, that's the community is what got us through the recovery process," said Becca. "So I think it's important to just help and be there and know that there's people out there to help and support you."

To register for the Walk for Thought, click here.