Residents across the U.S. have taken to the streets to clean up their neighborhoods after protests

Some of the protests, which have sprung up across the U.S. since George Floyd’s death, have turned into riots and clashes with police, leaving retail stores in flames and cars torched in the streets.

LOS ANGELES - Amid several days of protests, some of which have devolved into chaos, that have erupted across the country in response to the death of George Floyd, residents across the U.S. have taken to the streets to clean up their neighborhoods.

Floyd, who was black, died while being arrested by Minneapolis police on suspicion of passing a counterfeit bill on May 25. Cellphone video showed that a white officer, Derek Chauvin, pressed his knee into Floyd’s neck for several minutes while Floyd, who was handcuffed, pleaded for air and eventually stopped moving.

Chauvin now faces murder and manslaughter charges. The three other officers who took part in the arrest were fired but Haven’t been charged. 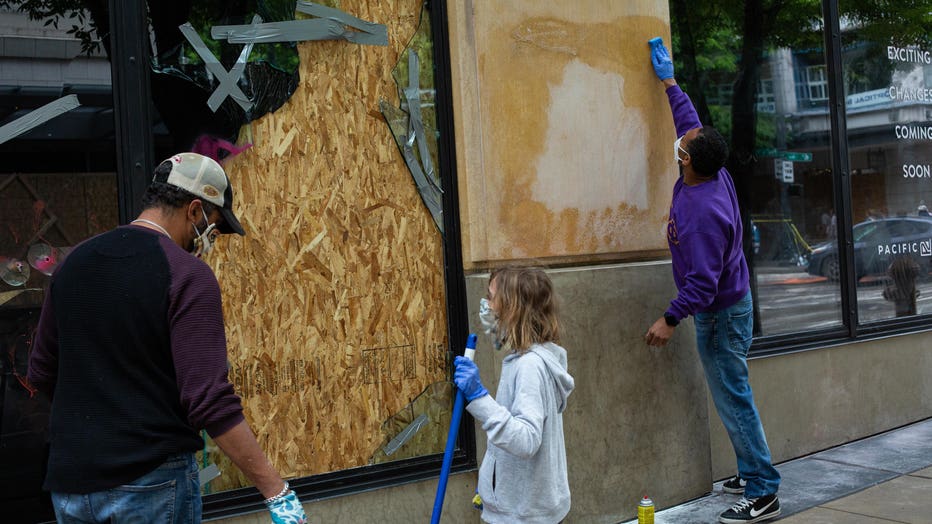 FILE - Volunteers help clean up a storefront on the day after violent protests due to the recent death of George Floyd on May 31, 2020 in Seattle, Washington. (Photo by David Ryder/Getty Images)

Some of the protests, which have sprung up across the U.S. since Floyd’s death, have turned into riots and clashes with police, leaving retail stores in flames and cars torched in the streets. Officials in several major cities across the country have ordered overnight curfews, and the National Guard has been called in the quell the violence in multiple states.

In Los Angeles, many businesses were preparing to reopen following months of closures implemented to curb the spread of the novel coronavirus, but some shop owners awoke the morning of May 31 to broken windows and vandalized buildings, some cleaned out and set ablaze by looters overnight.

The turbulence sparked by the death of George Floyd — a black man who died after being pinned under the knee of a white Minneapolis police officer — shook not only the streets of New York and Los Angeles, but dozens of smaller communities such as Fargo, North Dakota, and Lincoln, Nebraska.

Round Two, a popular vintage clothing store with multiple locations in the U.S., was slated for a reopening in Los Angeles, but instead of customers arriving Sunday morning, residents showed up to help clean up the mess left behind by looters, FOX 11 Los Angeles reported.

“There’s been a lot of support from the community, a lot of our friends are coming out, people who shop with us. So it’s really nice. We are trying to find all the positive in it,” said Sean Wotherspoon, owner of Round Two.

Community members in Grand Rapids, Michigan showed up Sunday morning to clean up the aftermath of a protest held there.

RELATED: Protesters march to US embassies in UK, Germany, Denmark as world reacts to death of George Floyd

“My heart is lifted as I make my way through downtown with hundreds of people helping clean up our city,” Bliss wrote.

Volunteers in Sacramento, California could be seen sweeping up debris as well.

The Sacramento Bee reported that people smashed the doors of a Macy’s and also stole from several other stores in Sacramento. Reports said Saturday’s demonstration drew about 200 people and ended shortly after 2 a.m.

Photos and video from Minneapolis showed buildings ablaze as angry demonstrations raged. A police precinct building was also torched May 28 amid the protests.

In the wake of the destruction, Marvin Applewhite, a resident of Minneapolis, posted pictures on Facebook of himself and several other volunteers going around the city cleaning graffiti and picking up trash.