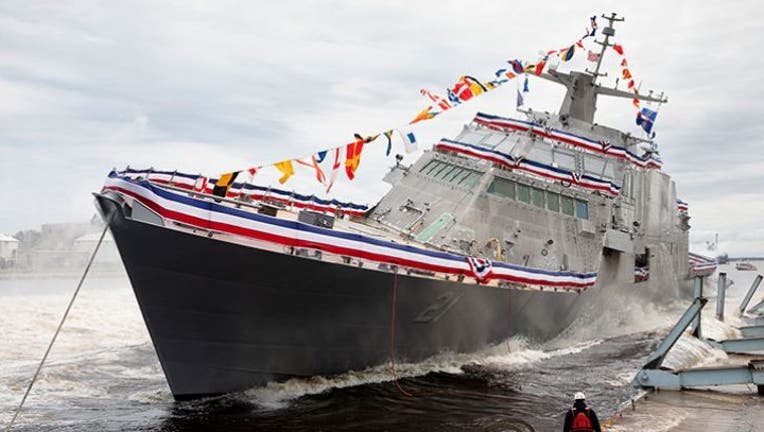 The USS Minneapolis-St. Paul was scheduled for commissioning this spring, but a discovered defect has paused the process.

DULUTH, Minn. (FOX 11) - The U.S. Navy says the commissioning of the USS Minneapolis-St. Paul in Duluth is on hold after a design defect was discovered.

The high-speed littoral combat ship was built at the Fincantieri Marinette Marine shipyard, and was christened in 2019. The acceptance trials were completed in August.

The Navy's newest ship, named after the Twin Cities, hit the water on Saturday.

The commissioning ceremony was expected to take place this spring in Duluth, Minn., until a problem with the propulsion system was discovered, and the ceremony was delayed.

"A recent Freedom class design defect associated with bearings in the combining gear’s high-speed clutch has industry and the Navy team pursuing a design fix for ships under construction as well as several of the ships that entered the Fleet," said Alan Baribeau, Naval Sea Systems Command, Office of Corporate Communication.

There is no timeline for a decision on what the repairs will be, how long they will take, or what the cost would be were provided.

"Once a delivery plan is established, the Navy will work with the cities of Duluth, Minneapolis, and Saint Paul to identify a commissioning date that works for all stakeholders," Baribeau said.

Lockheed Martin issued this statement: "In partnership with the U.S. Navy, Lockheed Martin is aggressively pursuing a resolution to the gear issue the Freedom-variant Littoral Combat Ship is currently experiencing."

According to a story on defensenews.com, which covers military issues, the combining gear unit at issue was built by RENK. RENK did not immediately reply to FOX 11’s request for a comment.

So far, ten LCS built in Marinette have been delivered to the Navy, with another six in various stages of production and testing.

FOX 11 and the Associated Press both contributed to this report.