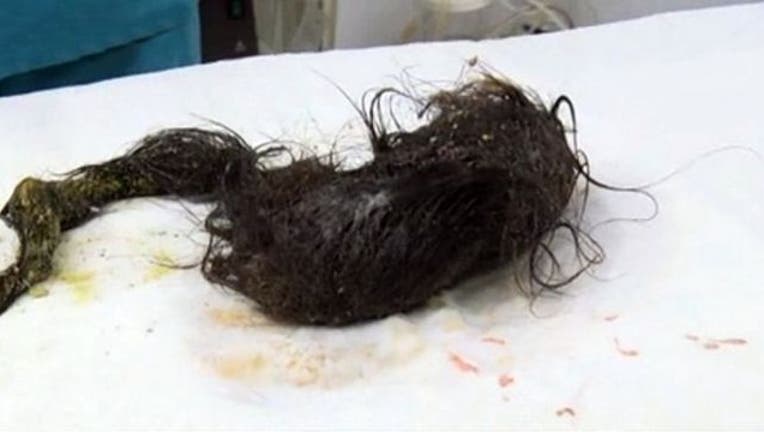 An 11-year-old in Kazakhstan is on the mend after surgeons removed a hairball that filled her stomach and extended more than 13 inches from the organ.

Central European News (CEN) reported that the girl, whose name CEN did not disclose, suffers from Rapunzel syndrome. The condition is marked by the ingestion of a non-absorbable food or fiber, which then forms an abdominal mass called a bezoar, according to the National Institutes of Health (NIH). Most bezoars in children are trichobezoars— a hallmark characteristic of Rapunzel syndrome— which extend from the stomach to the small intestine or beyond.

According to the NIH, bezoars from Rapunzel syndrome usually result from consumption of hair from the head, dolls or brushes. In this current case, the 11-year-old, from Taraz, in southern Kazakhstan, consumed so much hair from her own head that the mass filled nearly 7 inches of her stomach and continued about 14 inches into her bowel.

Her parents told CEN that they often noticed her chewing on her long hair but that they didn’t know the habit was harmful. They took her to the doctor after she began suffering from a severe stomachache, losing her appetite and not being able to drink water. Doctors removed the hairball, and they expect she will be able to resume eating and drinking, CEN reported.