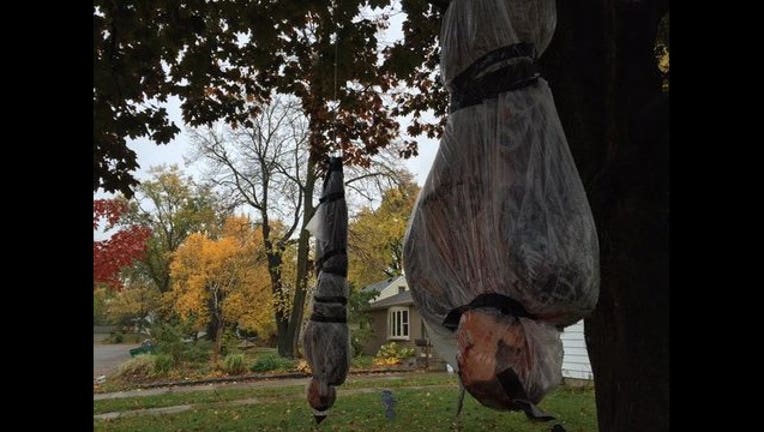 ST. LOUIS PARK, Minn. (KMSP) - A St. Louis Park man is taking some heat for some Halloween decorations his neighbors say are too graphic.

Kevin Amlees says his 12-year-old stepson wanted to put up decorations that would scare his friends, so Amlee turned to Pinterest for inspiration. He made corpses out of garbage bags, hay and his wife’s old mannequin heads from beauty school.

Amlee says he never thought the decorations would generate such negative reactions.

Jenny Brisson, a mother of two, noticed the display Monday morning when taking her daughter to the bus. She says she was initially disturbed by the display and its proximity to the bus stop and a public park, but after talking to the people inside the home, she feels much better about it.

It’s not something I would choose to decorate with, but now that I know them a little more, it’s fine and it's not Halloween forever,” Brisson says.

Edward Peitso, another neighbor, says he doesn’t think the display is appropriate, as there are children in the neighborhood.

"It's not only a head hanging there, it's a red head. I don't know, it's gruesome,” Peitso says.