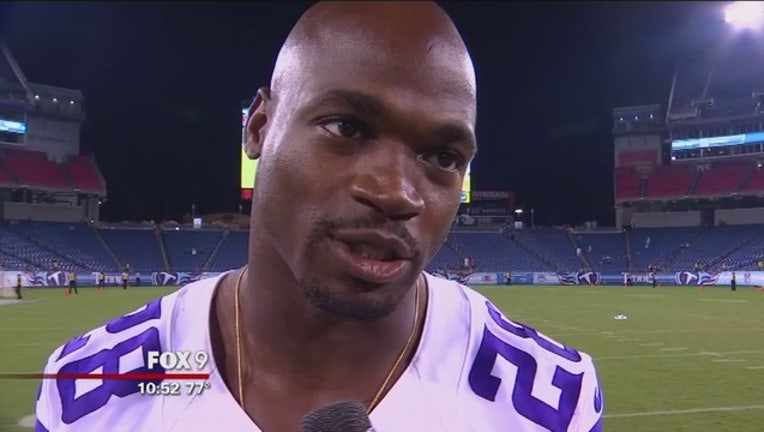 CANTON, S.D. (AP) — A South Dakota jury on Tuesday convicted a man of second-degree murder and other charges in the death of the 2-year-old son of Minnesota Vikings running back Adrian Peterson.

Authorities alleged that Patterson assaulted Tyrese while the two were alone in a Sioux Falls apartment. An autopsy concluded that the boy's head sustained four blows, causing his brain to bleed, and doctors determined that the injuries could not have been accidental.

Patterson's defense maintained during the trial that Tyrese choked on a fruit snack. A doctor who testified for the defense said autopsy photos indicated injuries consistent with a child being given CPR after choking.

The newspaper reported the verdict was met with outrage from Patterson's family and supporters, while Ruffin's mother and her family hugged and cried.

Deputy Attorney General Bob Mayer said after the verdict: "We couldn't be more excited and thrilled for Tyrese. He finally gets the justice he deserved."

A second-degree murder conviction carries a mandatory life sentence. Patterson is being housed at the Minnehaha County jail until his sentencing, which is likely to come within the next two months, according to the newspaper.

Peterson has said he found out the boy was his son only about two months before his death. He had been working with Tyrese's mother to arrange a meeting with the boy when he received a call that the child was hospitalized with severe injuries. Peterson said he raced to South Dakota and saw Tyrese for the first time a day before he died.