The compromise, announced by the West Virginia lawmaker and a Democratic aide, seemed to clear the way for the Senate to begin a climactic, marathon series of votes expected to lead to approval of the sweeping legislation.

The overall bill, President Joe Biden’s top legislative priority, is aimed at battling the killer pandemic and nursing the staggered economy back to health. It would provide direct payments of up to $1,400 to most Americans and money for COVID-19 vaccines and testing, aid to state and local governments, help for schools and the airline industry and subsidies for health insurance. 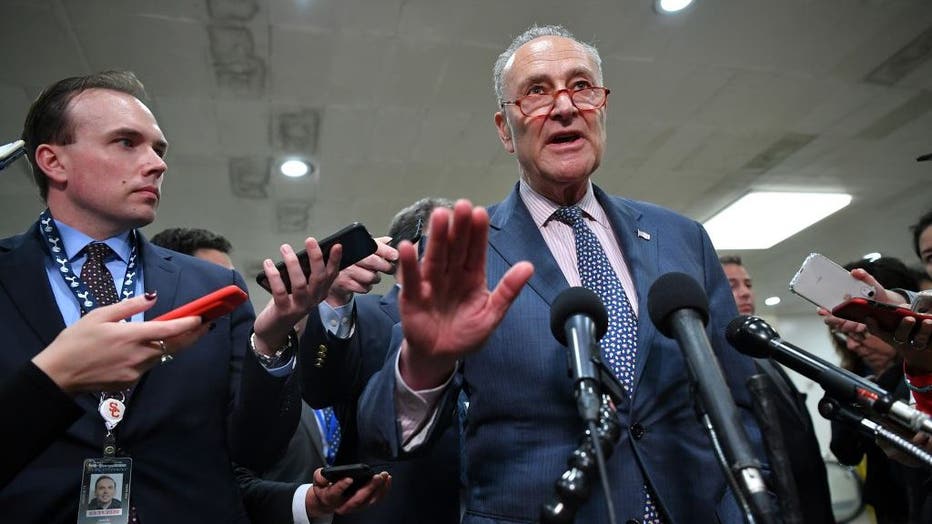 Senate Minority Leader Chuck Shumer is surrounded by media after a closed-door briefing on Iran at the US Capitol in Washington, DC, on May 21, 2019. (Photo credit: MANDEL NGAN/AFP via Getty Images)

With 10 million fewer jobs since the pandemic struck a year ago, aiding unemployed Americans is a top Democratic priority. But it’s also an issue that drove a divide between progressives seeking to help jobless constituents cope with the bleak economy and Manchin and other moderates who have wanted to trim some of the bill’s costs.

Democrats set aside one battle over boosting the minimum wage but promptly descended into another internal fight Friday as the party haltingly tried moving its $1.9 trillion COVID-19 relief bill through the Senate.

Hours after asserting they’d reached a deal between party moderates and progressives over renewing emergency jobless benefits, lawmakers said Sen. Joe Manchin, D-W.Va., was apparently ready to support a less generous Republican version. Work on the Senate floor ceased for over eight hours as Democrats sought a way to salvage their unemployment provision.

Manchin is probably the chamber’s most conservative Democrat, and a kingmaker in a 50-50 Senate that leaves his party without a vote to spare. With Democrats’ slim majorities — they have a mere 10-vote House edge — the party needs his vote but can’t tilt too far center without losing progressive support.

The episode tossed fresh complications into the Democrats’ drive to give quick approval to a relief bill that is President Joe Biden’s top legislative goal. And while they still seemed likely to pass the package, the problem underscored the headaches confronting party leaders over the next two years as they try moving their agenda through Congress with such slender margins.

"People in the country are hurting right now, with less than two weeks from enhanced unemployment checks being cut," Biden said at the White House, referring to the March 14 end to the current round of emergency jobless benefits. He called his bill a "clearly necessary lifeline for getting the upper hand" against the pandemic.

RELATED: In hopeful sign for economy, US adds 379,000 jobs in February

The relief legislation, aimed at battling the killer virus and nursing the staggered economy back to health, will provide direct payments of up to $1,400 to most Americans. There’s also money for COVID-19 vaccines and testing, aid to state and local governments, help for schools and the airline industry, tax breaks for lower-earners and families with children, and subsidies for health insurance.

The package faces a solid wall of GOP opposition, and Republicans used the unemployment impasse to accuse Biden of refusing to seek compromise with them.

"You could pick up the phone and end this right now," Sen. Lindsey Graham, R-S.C., said of Biden.

The standoff and a host of eleventh-hour deals Democratic leaders were cutting with rank-and-file lawmakers reflected the delicate challenge of navigating the precariously divided chamber.

In a compromise with moderates revealed earlier Friday, Senate Democrats said that would be reduced to $300 weekly but extended until early October. The plan, sponsored by Sen. Tom Carper, D-Del., would also reduce taxes on unemployment benefits.

Later, lawmakers said Manchin was backing an alternative by Sen. Rob Portman, R-Ohio, that would provide $300 weekly benefits until mid-July.

"I don’t know where he is," No. 2 Senate Democratic leader Richard Durbin of Illinois, said of Manchin’s latest stance on jobless benefits. Asked if Democrats could simply accept the GOP’s version, Durbin said: "We don’t want to. We want to get this wrapped up."

That was a nod to Democrats' need to move the overall relief bill once again through the House, which has a large numbers of liberals. It approved an initial version of the legislation last weekend, which the Senate has since changed.

Manchin has been a leading voice among moderates trying to rein the relief bill’s costs. Democratic leaders were trying to reach some agreement with Manchin, and his office did not return requests for comment.

"I feel bad for Joe Manchin. I hope the Geneva Convention applies to him," No. 2 Senate GOP leader John Thune of South Dakota told reporters about the pressure on the West Virginian.

Before the unemployment benefits drama began, senators voted 58-42 to kill a top progressive priority, a gradual increase in the current $7.25 hourly minimum wage to $15 over five years.

Eight Democrats voted against the proposal, suggesting that Sen. Bernie Sanders, I-Vt., and other progressives vowing to continue the effort in coming months will face a difficult fight.

But eight hours after that minimum wage roll call began, it still hadn’t been formally gaveled to a close as all Senate work ceased while Democrats struggled to resolve their unemployment benefits problem.

The next step would be a mountain of amendments, mostly by GOP opponents, virtually all destined to fail but designed to force Democrats to take politically awkward votes.

Republicans say the overall bill is a liberal spend-fest that ignores that growing numbers of vaccinations and signs of a stirring economy suggest that the twin crises are easing.

Democrats reject that, citing the 10 million jobs the economy has lost during the pandemic and numerous people still struggling to buy food and pay rent.

"If you just look at a big number you say, ‘Oh, everything's getting a little better,'" said Senate Majority Leader Chuck Schumer, D-N.Y. "It's not for the lower half of America. It's not."

In an encouraging sign for Biden, a poll by The Associated Press-NORC Center for Public Affairs Research found that 70% of Americans support his handling of the pandemic, including a noteworthy 44% of Republicans.

Democrats made a host of other late changes to the bill, designed to nail down support. They ranged from extra money for food programs and federal subsidies for health care for workers who lose jobs to funds for rural health care and language assuring minimum amounts of money for smaller states.

In another late bargain that satisfied moderates, Biden and Senate Democrats agreed Wednesday to make some higher earners ineligible for the direct checks to individuals.