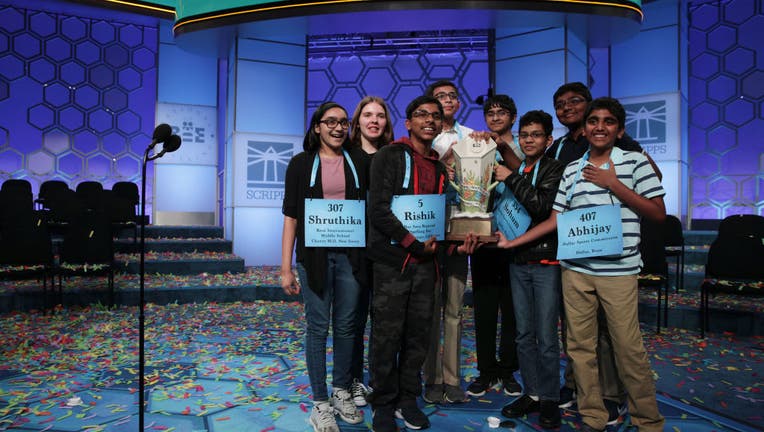 The winning spellers made history with the most number of co-champions in the spelling event history. (Photo by Alex Wong/Getty Images)

OXON HILL, Md. - This year's Scripps National Spelling Bee has been canceled after organizers concluded there is “no clear path to safely set a new date in 2020” because of the coronavirus pandemic.

The decision, announced by Scripps on Tuesday morning, means kids who are in eighth grade this year will miss their final opportunity to compete in the national finals. Scripps will not change eligibility requirements for next year's bee, which is scheduled for June 1-3, 2021, at its longtime venue, a convention center outside Washington. The bee has always been open to kids through the eighth grade.

“Our hearts go out to the spellers who won't get their final shot at winning because of the pandemic and the difficult decisions it is prompting us to make,” Paige Kimble, the bee's executive director, said in a statement.

Last year's bee ended in an unprecedented eight-way tie after organizers ran out of words difficult enough to challenge the best spellers.

Scripps had announced on March 20 that this year's bee would be postponed, but did not commit to a new date.

Organizers said Tuesday they would find a way to recognize the more than 150 spellers who had already won their regional bees and qualified for the national finals.