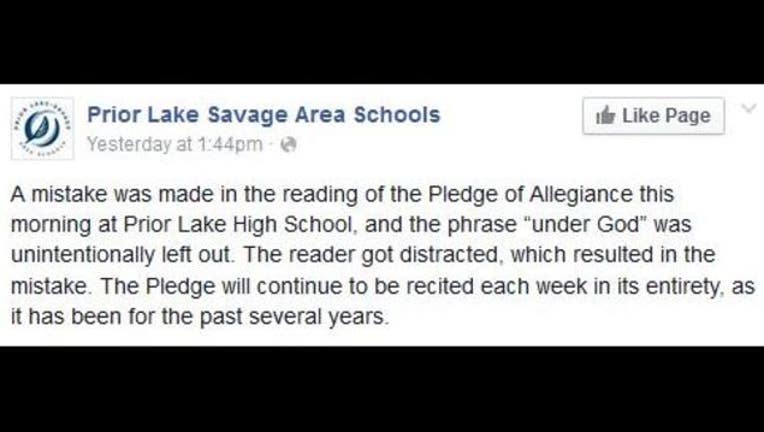 PRIOR LAKE, Minn. (KMSP) - Administrators at ISD719 Prior Lake/Savage Area Schools posted an apology on social media Tuesday after a Prior Lake High School student left out the words "under God" when reading the Pledge of Allegiance.

A mistake was made in the reading of the Pledge of Allegiance this morning at Prior Lake High School, and the phrase "under God" was unintentionally left out. The reader got distracted, which resulted in the mistake. The Pledge will continue to be recited each week in its entirety, as it has been for the past several years.

The Facebook apology has since received a lot of backlash from parents and the community, with the most "liked" comment being:

"Perhaps the student was one of the 11% or so students in the district who do not believe in God... and not satisfied having their religious liberty trampled each morning. Besides, like many things, the original 'one nation indivisible' is better - doesn't promote one religion over another, or trample no religion."

A common theme among many of the responses was that the phrase "under God" was incorporated into the Pledge of Allegiance on June 14, 1954, and should not necessarily be included -- "Here I'd hoped you'd decided to go back to the original, more constitutional version," a popular comment read.