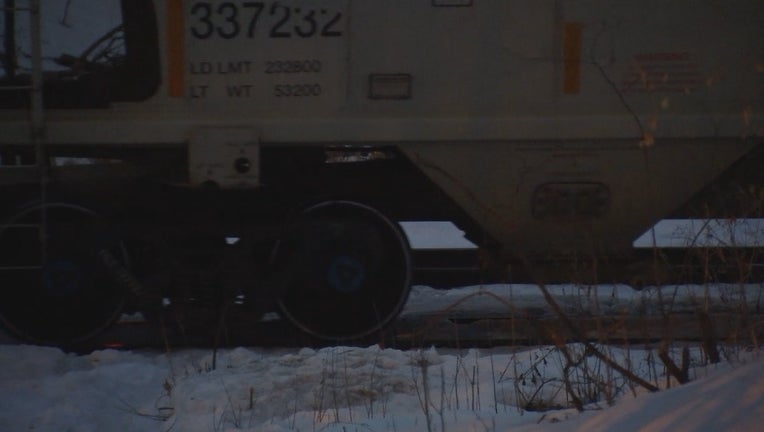 The employees spotted her near the train tracks during their shift over the weekend. (FOX 9)

ST. PAUL, Minn. (FOX 9) - Two railroad workers for Union Pacific are being hailed as heroes after they saved the life of a little five-year-old girl from St. Paul over the weekend.

Angie Knutson is always aware of her surroundings while working her shift as an engineer for Union Pacific Railroad. Around midnight Saturday as the train was passing through east St. Paul near Phalen Boulevard, she knew something wasn't right.

Railroad workers rescue 5-year-old girl who wandered away from home in St. Paul

Two railroad workers for Union Pacific are being hailed as heroes after they saved the life of a little five-year-old girl from St. Paul over the weekend.

“I happen to notice something out there that looked odd and I said, ‘Is that a little kid?’” said Angie Knutson, an engineer for Union Pacific Railroad. “We said, ‘It’s a little girl,’ so we stopped the train as fast as I could.”

She stopped the train and the conductor, Jarrod Campbell, jumped off to find the child and approached her.

“[I asked her,] ‘Are you doing ok? You look really cold,’” said Campbell. “She had no mittens, no hat, wearing a really light jacket.”

The five-year-old told Campbell her name was Zoey and she was looking for her mom. He got her on the train and bundled her up with his big coat.

“We were warming up her feet—they were just so cold—and definitely starting to see some early signs of hypothermia,” said Campbell.

“It was kind of devastating—I couldn’t imagine being a mother with my child missing, what would happen,” said Knutson.

Knutson called first responders. Police say the girl had been missing for some time that night. She was eventually reunited with her mother.

Campbell and Knutson hope to give this stuffed teddy bear to the girl if they get the chance to reunite.

FOX 9 reached to reach out to the girl's family for comment, but they were unavailable.