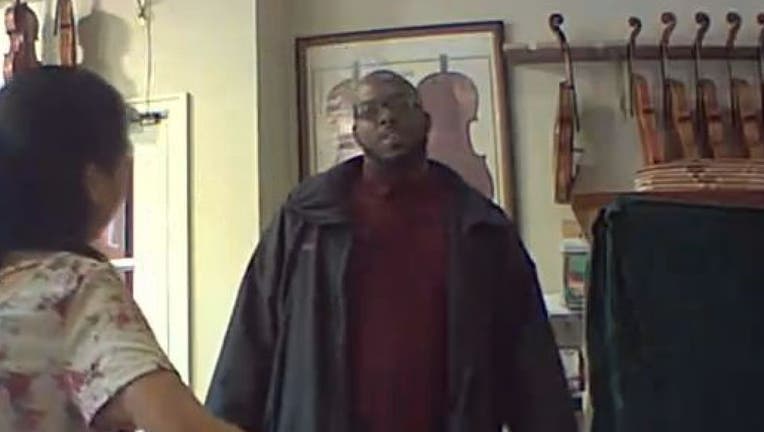 ST. PAUL, Minn. (FOX 9) - St. Paul police are searching for man who allegedly went into a music store, pepper-sprayed an employee and took off with thousands of dollars worth of violins.

For at least a brief moment Saturday, the music at Fein Violins along Grand Avenue in St. Paul came to a stop.

St. Paul police are searching for man&nbsp;who allegedly went into a music store, pepper-sprayed an employee and took off with thousands of dollars worth of violins.

"At some point, [the employee] was showing instruments, he turned around and pepper-sprayed her in the face and grabbed four instruments off the back rack there and took them and ran out the door," said Andy Fein, the owner of Fein Violins.

Store surveillance video shows a man go into the shop and tell an employee he wanted to buy an instrument.

As soon as the two walk out of the camera’s view, St. Paul police say the man pepper-sprayed the employee and stole four violins, which were worth tens of thousands of dollars.

Fein has called almost every music store and pawn shop in the Twin Cities and has been monitoring eBay and Facebook Marketplace in case the stolen instruments appear. He has even vowed to make changes to the way he operates his business.

"I always had an open door policy; anyone who wants to come in can come in,” said Fein. “Now we’re locking the door. It changes the whole aspect of your business."

He says his top concern is the well-being of the teenage employee who was victimized.

So far, one violin has been recovered at a pawn shop.