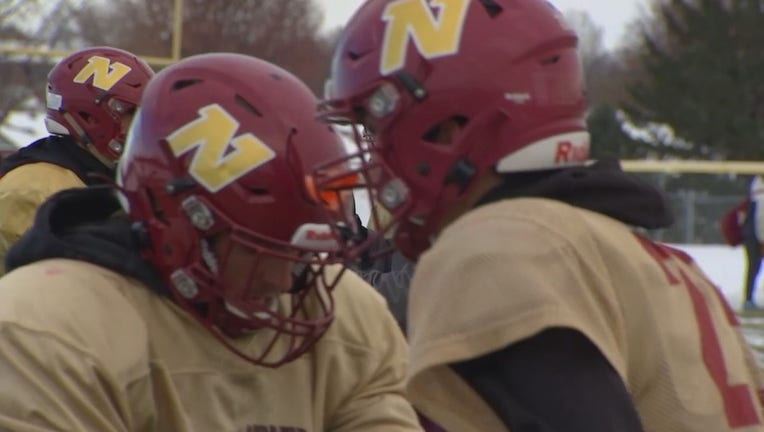 Northfield High School Football players decided to join a prominent Gophers star in taking on racism with a simple message.

NORTHFIELD, Minn. (FOX 9) - An anti-racist message first pushed by Gophers standout Rashod Bateman can now be found on the Maroon and Gold helmets of a team in Northfield, Minn., too.

Nick Lopez, a senior captain of the Northfield High School Raiders football team, believes enough is enough. When Head Coach Bubba Sullivan came to the team this fall with the idea to take a stand, his teammates jumped at the chance.

The team put “zero” decals on their helmets, meaning zero tolerance for racism.

“We’re all just brothers coming along,” said Lopez. “It doesn’t matter the race or ethnicity that we’re all coming from, it’s pretty awesome.”

“Zero racism, zero tolerance,” he said. “It’s pretty self-explanatory for us. We all agree. It shouldn’t be around. It shouldn’t be in this country. We all want to get rid of it as fast as possible.”

The zero tolerance push on the gridiron was first pushed by the talented Gophers receiver when he returned to Dinkytown with a new uniform number and a message this fall.

So far, according to the State High School Football Coaches Association, at least 10 teams have followed Bateman with the zero pledge, including Minneapolis South, Eagan, STMA and Northfield.

“It’s a push in our district this year and I just said, hey, on this team, as a coach, we’re not going to tolerate that. I would love for you to support that,” said Sullivan. “But I want it to be you, not me.”

As the zero tolerance for racism message spreads across the snow-covered football fields of Minnesota, Gophers Coach PJ Fleck couldn’t be more proud of his standout receiver.

“You gotta listen. You gotta be empathetic. And then you have to have action. Those are the steps in place,” said Fleck. “I think it’s wonderful people are following that lead of our football team, Rashod Bateman, his story and his initiative to wear zero for the year for zero tolerance.”

The Raiders say it’s easy to follow the lead of one of their favorite Gophers. When they saw Bateman gave their Northfield zero tolerance effort a retweet Monday, they were elated.

“Football is a place where everybody can belong,” said Sullivan. “We’ve seen that and love that leadership on this issue can come from the NFL and college, down to the high school kids. Let’s face it, if we’re going to change this, it’s going to come from the young people, finally.”