US births fall and COVID-19 could further that drop

U.S. birth rates have dropped and the CDC says the current pandemic could contribute to those falling more.

For many parents of young children, the highlight of their day is nap time – not for them, but for their little ones. Especially now, with most preschools closed, getting a child to nap is the golden ticket. Not only can it mean uninterrupted work or self-care time for parents, but their unrecognizable tyrants often wake as happy campers after a nap.

Researchers have validated this experience. One study presented 3-year-olds with an unsolvable puzzle, one with a missing piece, either after they napped or after they missed their nap. They found the nap-deprived children showed more negative emotions – sadness, worry and anger – when faced with the puzzle than rested children did.

As a cognitive neuroscientist, I study sleep. My research shows that naps help young children regulate their emotions and solidify memories that accumulate so quickly at this age.

My colleagues and I recently demonstrated that nap-deprived preschoolers not only showed more negative emotions, but paid closer attention to the emotions around them than rested children did.

We presented young children with pairs of faces on a computer screen, a neutral face and an emotional face – either happy or angry. Those faces were then removed to reveal a star hiding under one of them. The children were asked to identify which side of the screen the star was on by pressing a button.

Where is the star?

We found nap-deprived children were biased toward the emotional faces, responding 22 milliseconds faster than if they were rested. After a nap, however, children showed no bias. They responded equally whether the star was behind an emotional or neutral face. So a child who doesn’t nap is quicker to respond to emotional stimuli in his environment.

Although these results come as no surprise to parents, it is important to provide scientific backing of the nap benefit.

Most preschools offer a nap opportunity. However, the length of this period has been shortened in recent years because studies have found a preschool education not only improves school readiness but is also associated with long-term academic performance and even health outcomes such as reduced obesity and improved cardiovascular health.

To capitalize on the advantages of preschool during this fertile learning period, regulatory agencies have added expectations such as socio-emotional curriculum and even dental hygiene to the preschool day. Sleep is often viewed as optional and is an easy target to cut when making room for more educational opportunities.

However, naps make it possible to reach these early education goals. Beyond the emotional regulation payoff, naps also provide a direct benefit to learning. Research shows when preschool children were read storybooks introducing new words, the children who napped after hearing the stories learned more of the new words than the children who did not nap. Following learning opportunities with a nap enhances memory. 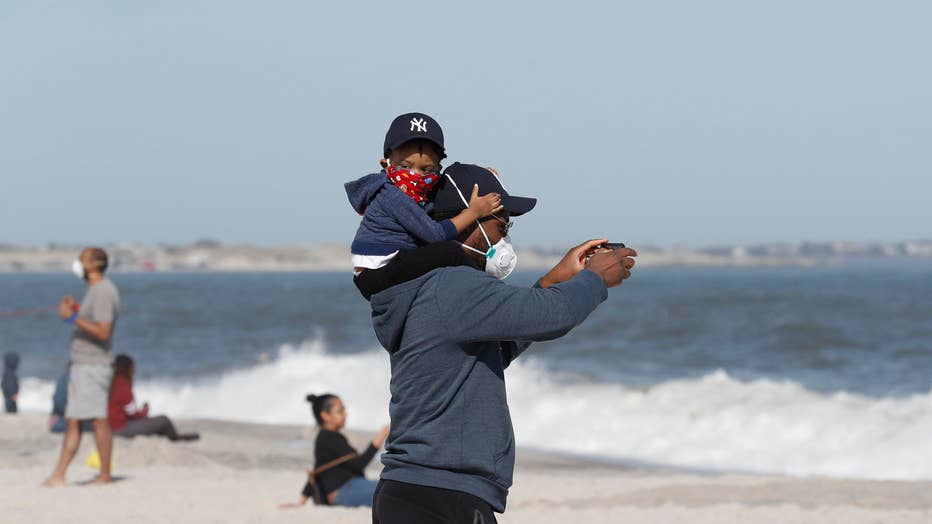 FILE - man and his child wear face masks at Jones Beach amid the coronavirus outbreak on May 2, 2020 in Wantagh, New York. (Photo by Liao Pan/China News Service via Getty Images)

The reason napping enhances learning has to do with the way brains process new information.

Research in rodents suggests that while we sleep, memories are replayed. Just as if you wanted to learn all the words to your favorite movie scene, you might replay that scene repeatedly, sleep is a time to replay memories without interference from ongoing learning. Furthermore, the research suggests memories are replayed in fast-forward during sleep, allowing them to be replayed repeatedly during the night.

Imagine the hippocampus as your desk at the end of the day, with stacks of papers and mail from different sources. Sleep moves these “papers” to the cortex, which is much more like a filing cabinet. Not only is there more space, but now when you want to find something, you can do so more quickly because of its organization.

In children, the hippocampus is less mature – think of it as a smaller desk – so fewer memories can be held before there is catastrophic interference. This explains why naps are critical at this young age, and memories must be more frequently moved to the filing drawers.

Naps in the time of coronavirus

To parents still learning to implement a nap time, a few pointers: