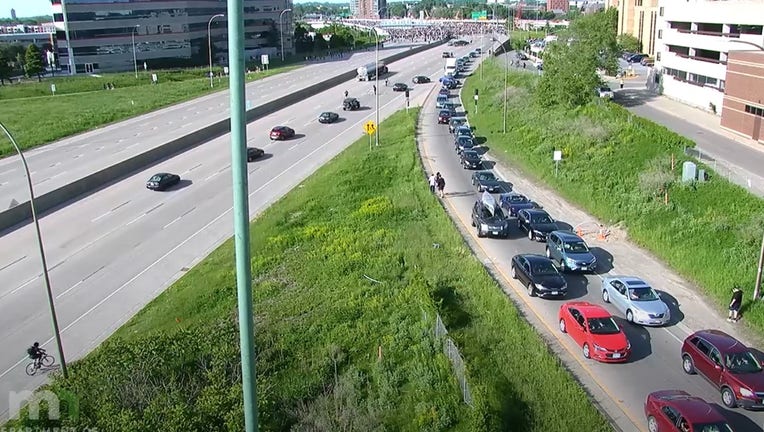 MINNEAPOLIS (FOX 9) - The Hennepin County Attorney says it will defer charges against a truck driver that drove onto to the I-35W bridge during a large protest Sunday.

Hennepin County Attorney Mike Freeman said the case against Bogdan Vechirko, of Otsego, will be deferred pending further investigation. He will be released from jail. Monday, authorities said Vechirko's actions did not appear to be intentional.

At the beginning of the video, you can see the truck driving as normal, south of the I-35W bridge in open lanes of traffic.

In a few angles before the bridge, you can see cars beginning to turn back or stop heading northbound on I-35W, but a few other cars, including Vechirko’s truck, continue to head north on I-35W.

In the camera angle just before the bridge, dozens of cars are stopped and are getting off the freeway on the northbound on-ramp going into downtown. Other cars turned around and headed south on the northbound lanes upon seeing the protests.

Vechirko’s truck can then be seen speeding by those stopped cars in the left lane and protesters notice and can be seen dispersing on the bridge. All other cars were stopped.

Another traffic camera angle shows the truck moving past protesters on the bridge before it comes to a stop. Vechirko is taken from the cab by protesters and placed under arrest by Minneapolis Police.

Truck barrels into George Floyd protesters on I-35W in Minneapolis

DISCLAIMER: Video may be difficult for some to watch. A tanker truck ran into a group of thousands gathered on the Interstate 35W Bridge in Minneapolis. The group was taking a knee to protest the police-involved death of George Floyd. Video Courtesy: MnDOT