Griner, a two-time U.S. Olympic champion and an eight-time all-star with the WNBA’s Phoenix Mercury, has been detained in Russia since Feb. 17 after police at a Moscow airport said they found vape cartridges containing cannabis oil in her luggage.

A judge convicted the 31-year-old athlete Thursday of drug possession and smuggling, and sentenced her to nine years in prison. The politically charged case comes amid high tensions between Moscow and Washington over Russia’s military action in Ukraine.

In an extraordinary move, U.S. Secretary of State Antony Blinken spoke last week to Russian Foreign Minister Sergey Lavrov, urging him to accept a deal under which Griner and Paul Whelan, an American jailed in Russia on espionage charges, would go free.

Lavrov and Blinken were both in Cambodia on Friday for a meeting of the Association of Southeast Asian Nations. Blinken did not even glance at his Russian counterpart as they took their seats at an East Asia Summit.

Lavrov told reporters that Blinken didn’t try to contact him while they were attending the ASEAN meeting.

"We were separated by just one person at the discussion table, but I didn’t feel his desire to catch me. My buttons are all in place," he said when asked about Washington’s statement that Blinken would try to buttonhole Lavrov for a quick interaction in Phnom Penh. 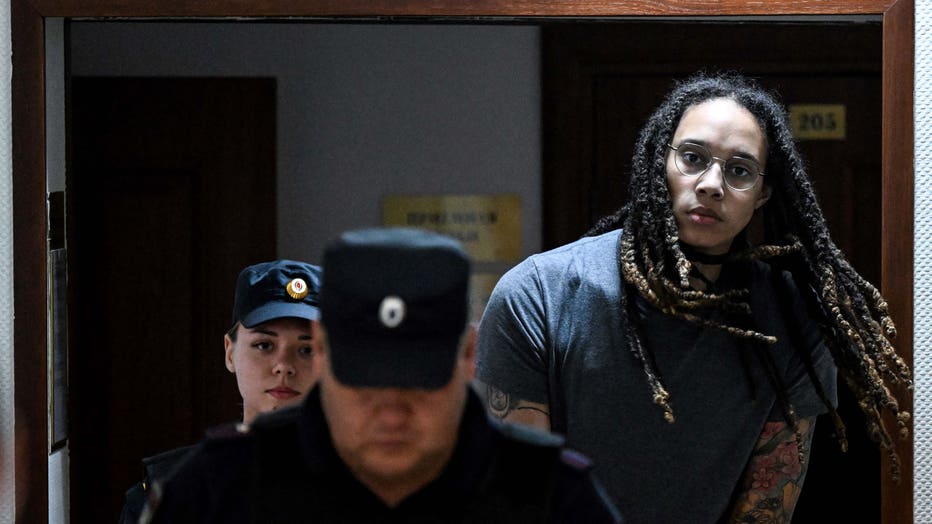 TOPSHOT - US Women National Basketball Association's (WNBA) basketball player Brittney Griner, who was detained at Moscow's Sheremetyevo airport and later charged with illegal possession of cannabis, is escorted to the courtroom to hear the court's f ((Photo by KiPhoto by KIRILL KUDRYAVTSEV/AFP via Getty Images)

Lavrov said Moscow was "ready to discuss" a prisoner swap but that the topic should only be discussed via a dedicated Russia-U.S. channel that Biden and Russian President Vladimir Putin agreed to establish when they met in Geneva in June 2021.

"If the Americans again try to engage in public diplomacy and make loud statements about their intention to take certain steps, it’s their business, I would even say their problem," Lavrov said. "The Americans often have trouble observing agreements on calm and professional work."

MORE: What will it take to get Brittney Griner home?

In Moscow, Kremlin spokesman Dmitry Peskov made the same point more harshly, saying "the U.S. already has made mistakes, trying to solve such problems via ‘microphone diplomacy.’ They are not solved that way."

He, too, emphasized that any discussions on a possible trade should be held via the previously established confidential channels that Putin and Biden agree to during last year’s summit.

"Such mechanisms exist, but they will be thrown into doubt if the discussion continues in the public domain," Peskov said. He said: "If we discuss any nuances related to the issue of exchange via media, no exchange will ever take place."

People familiar with the U.S. proposal have said it envisions trading Griner and Whelan for a notorious Russian arms trader, Viktor Bout. He is serving a 25-year sentence in the U.S. after being convicted of conspiracy to kill U.S. citizens and providing aid to a terrorist organization.

The call between Blinken and Lavrov marked the highest-level known contact between Washington and Moscow since Russia sent troops into Ukraine more than five months ago, underlining the public pressure that the White House has faced to get Griner released.

Griner was arrested as she was returning to play for a team in Russia, where she has competed since 2014. Blinken said Friday that her conviction and sentence "compounds the injustice that has been done to her."

"It puts a spotlight on our very significant concern with Russia’s legal system and the Russian government’s use of wrongful detentions to advance its own agenda using individuals as political pawns," he said.

On Thursday, Biden denounced the Russian judge’s verdict and sentence as "unacceptable" and said he would continue working to bring Griner and Whelan home.

David Rising in Phnom Penh, Cambodia contributed to this report.

Follow AP’s coverage of the Brittney Griner case at https://apnews.com/hub/brittney-griner

WNBA star Brittney Griner was detained at an airport in February after Russian authorities said a search of her bag revealed vape cartridges containing traces of cannabis oil.

Phoenix Mercury player and WNBA All-Star Brittney Griner has been jailed in Russia after vape cartridges were found in her luggage at a Moscow airport, according to multiple reports. A Russian news agency reported that Griner could spend 5 to 10 years in prison on drug smuggling charges, according to the New York Post. Credit: Federal Customs Service of Russia via Storyful