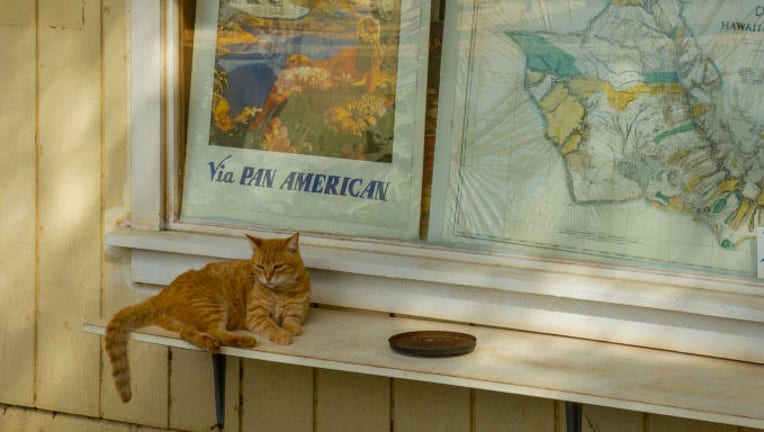 A cat relaxes on a storefront windowsill in Hanapepe on the island of Kauai, Hawaii, on Dec. 14, 2012. (Photo by Wolfgang Kaehler/LightRocket via Getty Images)

Plenty of cats may look cute and cuddly, but the strays in Hawaii are doing more damage there than many people realize, according to experts.

And for all those planning a visit to The Aloha State this year — whether in the week ahead (National Travel and Tourism Week is May 1-7, 2022) or later in 2022 — this information is useful.

The majority of wild and feral cats throughout the Hawaiian Islands tend to hunt certain protected species of wildlife; plus, they spread disease.

Experts at Hawaii’s Department of Land and Natural Resources (DLNR) are cautioning visitors against interacting with the cats. The aquatic division’s Ryan Jenkinson, PhD, shared in an interview with Fox News Digital exactly how the cats are harming Hawaiian wildlife.

"They are incredibly destructive animals to the native species in Hawaii," he said.

A stray cat sits in front of a rock in Kauai, HI, in Nov. 2013. (Nicole Pelletiere/Fox News Digital)

Since Hawaii’s species evolved without the threat of predators, a lot of the animals — Hawaiian monk seals included — are not equipped with defense mechanisms to ward off predatory cats.

Cats don’t hunt or harass monk seals, but they’re still a primary suspect in seal mortality, due to toxoplasmosis. This disease is transmitted through oocytes found in feline feces, which wash down into the streams and eventually the ocean, Jenkinson noted.

"Cats are amazing predators of wildlife," said Josh Atwood of the forestry division.

"The parasite, for some reason, really reacts strongly with marine mammals," he said. "It has a disproportionate effect on monk seals … The worst part about it is, it seems to target females, especially pregnant females."

Humans can also contract toxoplasmosis through increased exposure to cats, which the expert said has a "legitimate" impact on brain function.

Security footage captured the moment a flock of yellow-headed blackbirds crashes into the ground on a street in Mexico’s Chihuahua state early on Feb. 7, 2022. Credit: Alejandra Herlinda Iglesias Gonzalez via Storyful

Meanwhile, DLNR forestry division’s Josh Atwood confirmed that some seabirds that nest on the ground are being attacked.

"Cats are amazing predators of wildlife," he said. "Even ‘fed’ cats have an instinct to hunt wild animals."

The department has captured footage of cats slinking into bird burrows to hunt.

The expert added that toxoplasmosis — harmful to marine mammals — can infect birds as well.

It might be difficult to ignore large groups of adorable-looking cats when visiting Hawaii, but the two experts agreed that feeding and nurturing the cats will only worsen the issue and further the spread of disease.

"It’s so hard because you don’t realize that by giving them food, letting them continue to reproduce — they’re having this huge impact on our native species here," Jenkinson said.

"It is a really hard subject because people really love their cats."

"Cats in sanctuaries … go visit them, pet them," Atwood said.

"Just a suggestion for people visiting: Don’t feed the cats," he added. "If you want to take them home with you — awesome."

For visitors who would like to be affectionate in a "safe space" with Hawaii’s cats, Lanai Cat Sanctuary allows tourists to interact with cats in a protected enclosure.

The private, non-profit organization, recommended by Atwood, is located on the island of Lanai and makes an effort to separate the cats from the outdoor areas inhabited by native species.

"Cats in sanctuaries … go visit them, pet them," Atwood said.