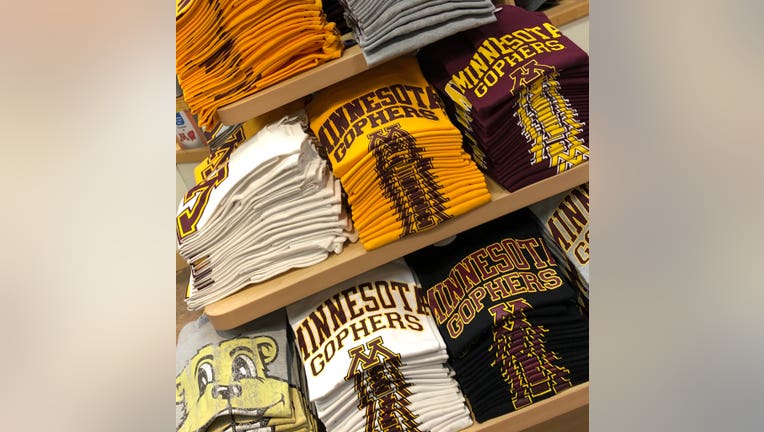 Goldy's Locker Room in Dinkytown is stocked up after the football team's historic and emotional win Saturday in Minneapolis.

MINNEAPOLIS (FOX 9) - Minnesota Football fans are loving how the 2019 season is going and they are hoping that the fan spirit will stay strong through the rest of the team's run at a championship this fall.

What is good for the Golden Gophers is very good for Goldy’s Locker Room, an apparel and spirit store near the U of M.

Minnesota Football fans are loving how the 2019 season is going and they&nbsp;are hoping that the fan spirit will stay strong through the rest of the team's&nbsp;run at a championship this fall.&nbsp;

“Just looking for some gear, probably for next game,” said Sophia Belden, a U of M junior at the store Sunday.

The huge win Saturday over Penn State at home meant a steady stream of fans stocking up on gear in Dinkytown Sunday.

The team is 9-0 for the first time since 1904 and they continue to climb the rankings.

“It’s been quite a while since they’ve had anything like that,” said Jeff Thone, a Gophers fan.

For life-long fans, the winning feeling is decades in the making.

“You find small victories, so now we had a big victory, which is kind of fun,” Thone added.

Past players, like FOX 9 Analyst Ron Johnson, are soaking it all up, too.

“Being down on the sidelines and seeing that…it was just electric,” said Johnson, a former Gophers Wide Receiver.

Johnson says the wins aren’t by accident, either.

“Don’t take any team for granted,” Johnson said. “This is a 0-0 season. The next game is coming up.”

The players are buying into the mantra that Head Coach PJ Fleck has laid out.

“Fleck has kind of pioneered this ‘Row the Boat’ culture and it’s not just that it’s changing the narrative, it’s changing your best every day,” Johnson said. “It’s being a better human being. It’s giving back to the community.”

Johnson believes the future is bright for the Golden Gophers program.

“You look at what other aspects of recruiting this helps,” he said. “I mean, I was in the locker room and there were probably 50-65 recruits at this game.”

Johnson hopes the fans continue to keep their spirit strong, no matter what.

“Ride with the team, win, lose or draw,” he said. “Close games, blowouts, whatever it is, just be there. That’s what I think this team needs.”

The Gophers face Iowa at 3 p.m. Saturday in Iowa City. You can see that game on FOX 9.