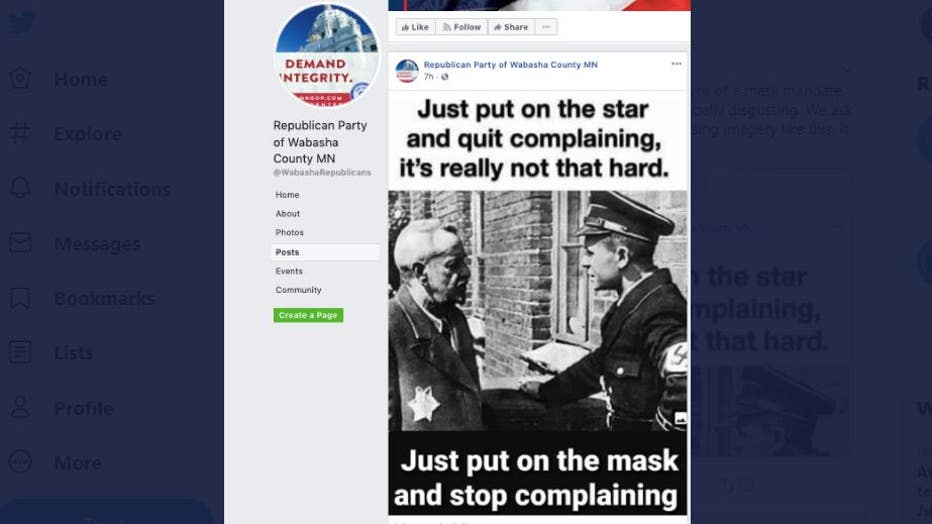 A screen grab of the image posted on the Wabasha Republicans Facebook page, which has since been taken down (Jewish Community Action / FOX 9)

Carnahan reversed her initial Sunday night statement on the incident, in which she had said the Wabasha County GOP thought its Facebook account had been hacked.

“Given that Minnesota rabbis recently spoke out in favor of a mask mandate, comparing that mandate to the Holocaust feels especially disgusting. We ask the @MNGOP to tell Wabasha Republicans to stop using imagery like this. It betrays a total lack of both empathy and education,” JCA wrote on Twitter.

“This is appalling. As we stated over the weekend, to compare public health measures to Nazi orders for Jews to wear yellow badges is reprehensible and wholly inaccurate,” the JCRC said in a Facebook post, referencing an incident in which a couple was banned from Walmart in Marshall for wearing Nazi flag face masks.

The organization said it is requesting a meeting with Carnahan to “express our dismay and demand a plan to halt these absurd and offensive comparisons.”

“They believe this was a hack and are removing their FB page immediately,” she tweeted Monday night. “Our party does not support/condone divisive and harmful posts or language of this nature.”

Tuesday afternoon, Carnahan sent out another statement, saying the further investigation by the party found the Wabasha County Facebook page was not hacked.

“We are saddened by the vitriolic post and hope as we move forward that Republicans and Democrats alike will maintain the highest level of integrity, respect, and sensitivity,” she said. “The Wabasha County Board and MN GOP apologizes for this disappointing post."

The Republican Party of Wabasha County’s Facebook page remains down as of Tuesday afternoon.