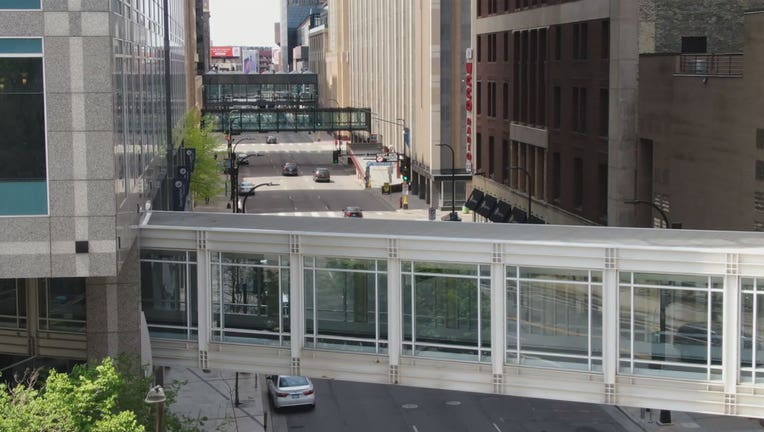 Downtown Minneapolis is seeing more workers return to work after the downtown workforce shrunk during the pandemic and during the trial of Derek Chauvin.

MINNEAPOLIS (FOX 9) - Two weeks after the verdict in the Derek Chauvin trial, plywood and fencing downtown Minneapolis are nearly gone and businesses in the skyways are starting to reopen. But, they say it’s going to be a long time before they see customers at pre-pandemic levels.

Julie McNally, a downtown worker, says she is starting to see more people recently after returning to her downtown office part-time in January. Monday was her first day back riding the bus to work. McNally has noticed more rush hour traffic into downtown, but people on sidewalks are still sparse.

The downtown Minneapolis workforce is inching toward returning to normal.

Up in the skyways, traffic is picking up a little bit, but still appears desolate.

"There’s some businesses that are just gone now," she said. "That’s what’s heartbreaking about all of it."

Steve Cramer, of the Downtown Council, says there were about 218,000 workers downtown each day before the pandemic. It was about 5 percent of that through much of 2020. It’s now inching up in 2021 to nearly 15 or 16 percent.

His sense is that it will continue to grow through the summer, but he sees Labor Day as the turning point when companies will put new policies into place. He thinks people will return to the office then, but not always full-time. Some companies will allow for more remote working flexibility, though.

"I think all of us want a vital downtown," Cramer said. "That’s what makes your city engaging. That’s what causes new businesses to come. That’s what gives your kids jobs."