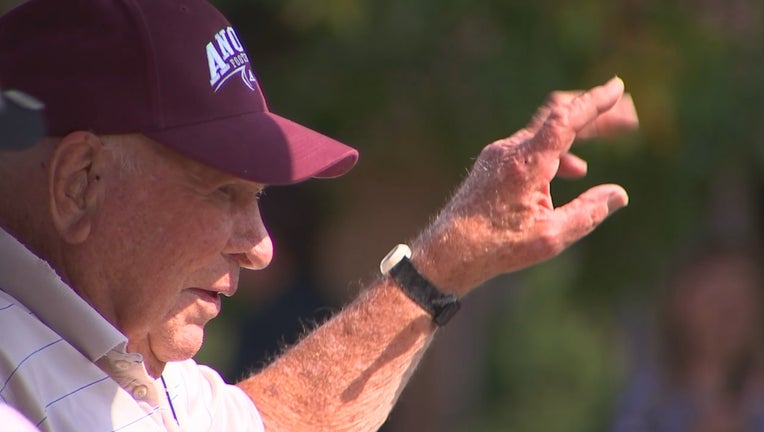 ANOKA, Minn. (FOX 9) - The community turned out in Anoka, Minnesota for a special celebration for a Minnesota man who has touched hundreds of lives. His name is Stan Nelson, but up in Anoka, everyone still knows him as “Coach.”

Tuesday, an entire generation of football players came to wish Nelson a happy 100th birthday. Nelson has a century worth of memories, but it’s the 26 years as Anoka’s football coach that everyone still celebrates.

Marv Danielson played, so did just about everyone in attendance.

“I hardly ever had Stan call a play. He told me, ‘You’re in charge. You call the plays,’” said Danielson, Anoka High School Class of 1969.

“And so it’s just you know, kind of a fraternity,” said Joe Klohs, Anoka High School Class of 1969.

“Every time we had that big victory, it was the highlight of the night,” said Nelson.

Nelson still remembers every player, every position they played.

“And for his age, boy he’s sharp,” said Tony Arellano, a former player. “He’s got it together still for his age.”

Football made his life, but what defined his life was his service.

“As far as I’m concerned, it was the greatest thing that ever happened in my life, that I could serve my country,” said Nelson.

On the day that changed the history of the world, Nelson was there. When General Dwight D. Eisenhower ordered the invasion of Normandy, it was Nelson, a young Navy ensign who piloted troops to Omaha Beach on his landing craft.

“Serving your country is something that’s in your heart and it means so much,” said Nelson.

Stan Nelson the Navy man is still sailing through the relationships that he’s anchored for 100 years.

“It’s the power of love,” said Steve Nelson, Stan’s son. “It just shows you what impact he had on all of these people’s lives, and it’s just incredible. Very, very proud of him.”