It followed another morning phone call between the two men five days earlier on May 12.

Sources close to Hutchinson said Freeman’s counsel played a pivotal role in the sheriff’s decision to go on medical leave.

At the time, Hutchinson was not only facing the fallout from his drunk driving crash six months earlier, but also a fresh county investigation into whether he had created a hostile work environment in the sheriff’s office.

The FOX 9 Investigators learned about the two phone calls from a public records request for Freeman’s work calendar. Freeman’s calendar shows no other phone calls or appointments between the two men in the previous six months. 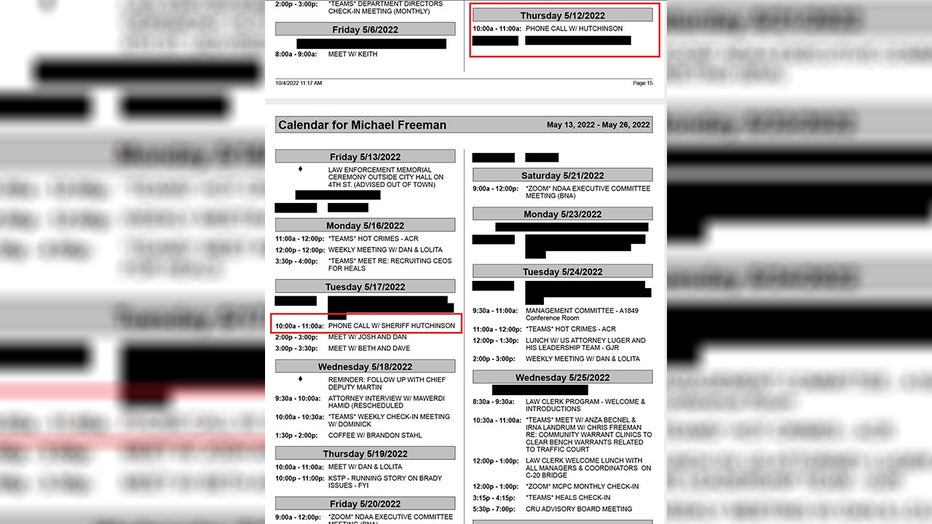 Freeman has declined to answer questions about the nature of his counsel to the disgraced sheriff, and his precise role in those conversations.

"I believe all my conversations on this topic are within the scope of attorney client privilege and accordingly can’t comment," Freeman wrote in a June 22 email after FOX 9 sought clarification of his role.

In a follow-up email, FOX 9 asked Freeman who precisely his client was: Sheriff Hutchinson, Hennepin County Administration, or both?

FOX 9 also asked Freeman if he has served as a ‘sponsor’ for Hutchinson in Alcoholics Anonymous or any other kind of recovery from substance abuse.

Such a role might present a conflict of interest for the veteran prosecutor, who did not seek another term.

Freeman wrote back on June 23, "I serve under statute as the attorney for the Sheriff’s office and the Sheriff. Accordingly, all three of your new questions set forth below, remain within the scope of my representation of my client the Sheriff and his office."

"With respect to issues of personal advice or sponsorship, they too are confidential conversations which I am not at liberty to disclose," Freeman wrote.

Through a spokesperson, Freeman was offered an opportunity last week to clarify his remarks but did not respond.

The two top law enforcement officers in Hennepin County have some things in common. Both men have reportedly sought counseling for substance abuse, and both are accused of creating a hostile work environment.

On Thursday, the Hennepin County Board voted to censure Hutchinson for "behaving in a hostile and retaliatory manner toward Sheriff’s Office personnel."  The FOX 9 Investigators reported in July that Hutchinson’s senior command staff complained about a hostile work environment and racist text messages.

Coincidentally, the censure comes a year to the day after Hutchinson got into a drunk driving crash while returning from a law enforcement conference in Alexandria.

Freeman admitted to a problem with alcohol in May 2019 and sought treatment, returning to work four months later.

Freeman was accused by one of his top prosecutors, Amy Sweasy, of creating a hostile work environment. Hennepin County settled the case in May for $190,000.

Sweasy no longer reports directly to Freeman, but last month she filed a lawsuit saying Freeman is still retaliating against her and violating the terms of a settlement agreement.

FOX 9’s initial request for Freeman’s work calendar was denied, until FOX 9 offered prior administrative court rulings that said such information could be reasonably redacted.

Freeman’s calendar for Tuesday, May 17, lists a 10 a.m.-11 a.m. "PHONE CALL W/ SHERIFF HUTCHINSON."  That entry is preceded by a meeting that has also been redacted.

The calendar records provided last month have more than 200 redactions.