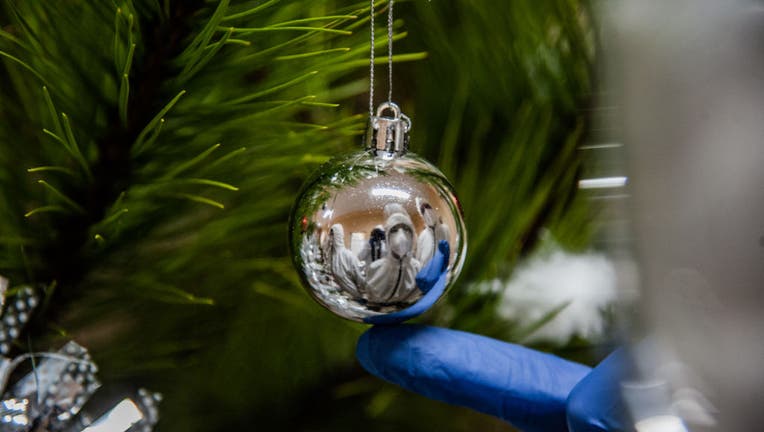 Doctors wearing protective equipment are reflected in an ornament as they decorate a Christmas tree inside a COVID-19 intensive care unit on Dec. 24, 2020 in Sofia, Bulgaria. (Photo by Hristo Rusev/Getty Images)

NEW YORK - At least one person has been hospitalized with COVID-19 after attending a local New York City Republican club’s holiday party that went viral online after a video showed attendees celebrating indoors without masks.

Video of the Dec. 9 event, hosted by the Whitestone Republican Club in Queens, received more than 4 million views after being shared online. The video shows several maskless attendees dancing in a conga line to the Bee Gees’ "You Should Be Dancing" at the indoor restaurant, with a man leading the line while waving a flag that appears to read, "Trump 2020."

The club confirmed at least one attendee of the party, identified as Jim Trent, had been hospitalized with the virus.

"We have been made aware that one attendee from our holiday party has tested covid positive. We wish the best to Jim Trent for a speedy recovery and understand that his hospitalization was purely precautionary, and that he is being released today," the Whitestone Republican Club said Dec. 31 in a statement. "Whether he contracted the virus at our event, his club’s holiday party held a few days prior, or in the normal course of life will likely never be known."

Trent, who is chair of the affiliated Queens Village Republican Club, told the local Queens Daily Eagle that he began experiencing symptoms two days after the party. He added that he was surprised that he got COVID-19 because he "wasn’t doing anything risky."

"I wasn’t on the conga line. I ate by myself," Trent told the newspaper. "I don’t know how I got this."

The Queens Daily Eagle reported that another attendee and his wife also tested positive for COVID-19 after the event, citing three sources connected to the couple.

The video, shared Dec. 21 on Twitter, drew criticism — including from New York Gov. Andrew Cuomo, who said that "conga lines are not smart."

"Why you would do an unmasked COVID conga line in the middle of a COVID pandemic, whatever your political persuasion, defies logical explanation as far as I’m concerned," Cuomo said last week during a press conference.

Indoor dining at 25% capacity was permitted at the time of the Dec. 9 event, but patrons were required to wear masks — with the exception of those seated at their table. Five days after the event, Cuomo issued a ban on indoor dining, citing a concerning increase in virus-related hospitalizations heading into the holidays.

A day after the video was shared, the Whitestone Republican Club sharply defended hosting the party and said it "abided by all precautions."

"Yes, we held a holiday party. A good time was had by all. We abided by all precautions. But we are not the mask police, nor are we the social distancing police," the club wrote in part on its Facebook page. "Adults have the absolute right to make their own decisions, and clearly many chose to interact like normal humans and not paranoid zombies in hazmat suits. This is for some reason controversial to the people who believe it's their job to tell us all what to do."

Experts say current COVID-19 vaccines will likely work on the new variant of the coronavirus in the United Kingdom, but are working to confirm that with additional testing.

The New York State Liquor Authority also launched an investigation into Il Bacco, the Italian restaurant where the party was held, and said it found "flagrant violations," according to the New York Times. The restaurant’s liquor license has been suspended indefinitely, the Times reported.

Il Bacco did not immediately respond to a request for comment.