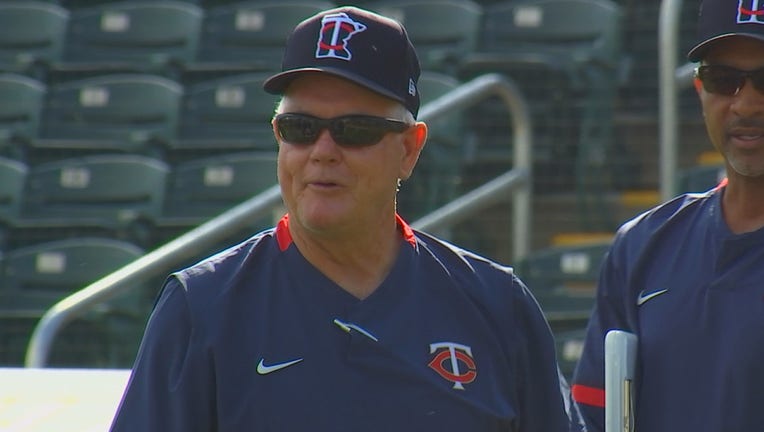 Bill Evers and Bob McClure will not be allowed to work games during the 2020 Minnesota Twins season due to health and safety concerns amid the Covid-19 pandemic.

MINNEAPOLIS - The Minnesota Twins are making every preparation and doing everything they can to make sure baseball is safe for everyone involved when it comes to Target Field.

For some coaches, that means they won’t be at the field during the 60-game season. Twins President of Baseball Operations Derek Falvey confirmed on Monday that Bob McClure and Bill Evers will not be allowed to work games during the 2020 season, due to health and safety concerns related to the Coronavirus pandemic.

The Minnesota Twins have to make some tough decisions amid the COVID-19 pandemic.

Baldelli told reporters Monday via Zoom, from a dugout at Target Field, that it was among the most difficult conversations he’s had since being involved in baseball.

“First and foremost I think we all know we’re making the right decision, it doesn’t mean it feels good,” Baldelli said. “Both wanted to be a part of this season more than anything, both were very disappointed to hear the news. But I also think both also know that it’s probably the right and safe thing to do. About as difficult of a call to have to make as you’re ever going to have in the game of baseball. Both have been in the game 45-plus years, to get news like this, I couldn’t imagine what that would feel like. But also both are going to stay very involved in what we do.”

Front office officials made the decision on McClure and Evers after looking at medical histories of their entire staff and putting age in to play. They also looked at pre-existing conditions.

Both will be paid for the 2020 season, and will have duties shifted into more of an advisory role away from the ballpark on game days.

“In terms of what they’re doing for the season, both guys are integral members in everything we do within our baseball operation,” Falvey said.

Players and staff not already in the Twin Cities are arriving this week, with the intent to start summer training by July 3 or 4. Before they can do anything on a baseball field, players and staff have to undergo a medical evaluation and Covid-19 tests, which are sent to a facility in Utah for results.

Falvey says there will be 131 Covid-19 tests done before training camp starts. Players and team staff considered to be in Tier 1 will be tested every other day when baseball activities start. Other tiers will be tested up to twice per week.

One person that has to be extra vigilant when it comes to Covid-19 and potential systems is Baldelli, the reigning American League Manager of the Year. Baldelli had his baseball playing career end due to Mitochondrial channelopathy, a rare cell disorder that can cause severe muscle fatigue and can be life-threatening.

Baldelli has what’s considered to be a moderate form that can be managed with proper medication and nutrition. Covid-19 can be deadly to those with pre-existing conditions, but Baldelli says he’s not concerned after talking with team doctors.

“I feel good, I feel strong. I don’t have any one particular reason to be really concerned. In really specific terms in relation to what we’re dealing with right now with this pandemic, I don’t have any specific concerns that would keep me away from being at the field,” Baldelli said. “If I did, I would address them, I would have the conversations that are appropriate.”

Covid-19 testing among players and staff started Sunday, and will continue Tuesday and Wednesday. Small-group workouts will take place at Target Field and CHS Field in St. Paul, with most minor leaguers working out at the home of the St. Paul Saints.

Once players have been cleared medically, Baldelli plans to address both groups on the season ahead.

The Twins say they’re monitoring the potential to play exhibition games at the end of their training camp. Major League Baseball will allow no more than three exhibition games, and that possibility depends on their health and schedule for the first week of the season.

Just as important as staying healthy at the ballpark is what players will do when they go home, or play on the road. It means going straight home from the ballpark, or when playing a road series, it’s straight back to the team hotel after games. Instead of a night out at a restaurant, it means a takeout dinner from a place organized by the team.

Baldelli doesn’t want to police his players. Rather, remind them to think about their teammate when they want to do something that otherwise might not be safe amid the Covid-19 pandemic.

“This does create a very unique challenge, and we’re going to challenge our players to look at the guy next to them and do everything that they can do to protect that person. That’s going to include everything we do away from the ballpark,” Baldelli said. “For the next three-plus months when we’re together, that’s going to be the consideration that we ask from all of our guys.”