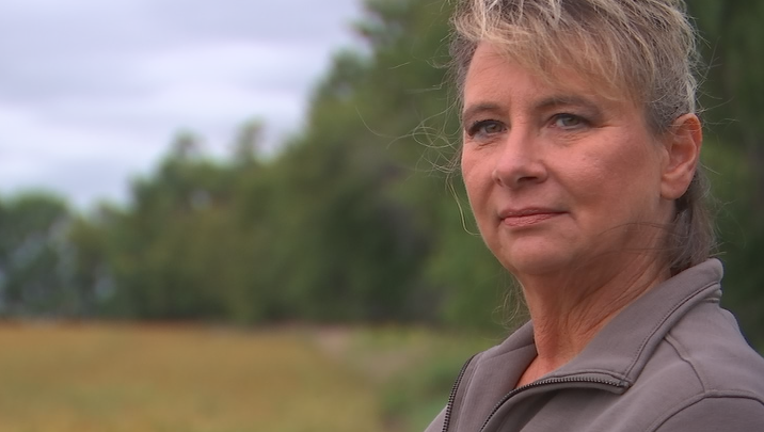 Mental illness affects farmers across Minnesota and the rest of the U.S. Several organizations offer resources to help those struggling. (FOX 9 Minneapolis-St. Paul)

Theresia and her husband farmed the land together for 30 years. These days she is alone on the farm; Keith took his own life two and half years ago. Just as the couple refinanced and bought more land, soybean prices took a dive, then there were a couple years of bad weather.

The Last Harvest: The Perfect Storm

Many producers find it difficult adjusting to a new economic reality beyond their control. They might even convince themselves they’re doing their family a favor by dying.

“He’d be up at night and I’d say come to bed. He’d be looking something up on the internet or sitting in the dark, and that was a pretty big sign,” Gillie recalled. “Hindsight’s a lot easier 20/20 than when you’re living it.”

Gillie was bringing in extra income, as a Kittson County Commissioner and President of the Minnesota Soybean Growers Association, but the farm debt weighed on Keith.

She remembered the night before her husband died. They were with neighbors.

“We’d get together with them often. He seemed fine, almost like a sigh of relief and I am thinking he is going to be fine.”

The next morning came and so did the dread of what that day would bring.

She looked for Keith via an app they shared on their cell phones and noticed a dot in the middle of nowhere.

“I pulled it up and he was four minutes away, and 10 minutes later he was still four minutes away. Bryce was here and told him ‘I’m going to find your dad.’  It took me to right where he was,” she remembered.

Keith apparently stepped out of his vehicle to take his life, while the engine was still running. Theresia doesn’t know if it was a spontaneous decision or if he was planning it. There was no suicide note. The only thing her husband left her with was debt and a lot of questions.

“I know people get notes and the spouse at least tells them that he loves them, and I don’t have that... pretty crappy because all I get to do is assume,” she said.

THE ONE AND ONLY

Ted Matthews is a mental health counselor with the Department of Agriculture who works with farmers across Minnesota at no cost and doesn’t require paperwork.

Matthews was the only one doing this kind of work in Minnesota for years. However, the Minnesota Legislature recently approved funding a second counselor to help farmers. She begins her duties October 1.

Many producers find it difficult adjusting to a new economic reality beyond their control. They might even convince themselves they’re doing their family a favor by dying.

“You get into this negative thinking. ‘I have life insurance, then they can pay off the farm.’  One of the things I stress all the time is: how would you feel if your wife committed suicide, is that what you would say, oh good,” Matthews said.

There is a timeless question the counselor will ask that reframes most problems.

“You say to people, 'what’s the most important thing in your life?' People say ‘family’ and I say, ‘what have you done to strengthen your family?’ They look at me like, 'what are you talking about,'” he said.

According to experts, tracking the number of farmers who take their own lives is difficult. Current numbers are not yet available.

In 2016, the Centers for Disease Control published a study saying suicides in the farming, fishing and forestry industries were almost five times that of the general population. The CDC retracted the study because the information was inaccurate due to a coding error. The corrected version said the suicide rate for the group was about even with the rest of the general population.

An older, but more reliable study from the University of Iowa study revealed between 1992 and 2010, farmers and ranchers had a rate of suicide that was 3.5 times that of the general population.

The National Farm Medicine Center, a nonprofit program in Marshfield, Wisconsin dedicated to agriculture health and safety, found that during the farm crisis of the early 1980s, the suicide rate among farmers was almost twice that of other white males over the age of 20.

Regardless of where the numbers come from, suicide rates may not be accurate due to the fact that some farmers disguise their suicides as farm accidents.

A more telling number comes from those asking for help. Phone calls to the Farm Aid hotline, the national group that helps farmers with a variety of issues, have increased 109% in 2018 versus 2017. The group told FOX 9 the pace of calls this year is similar to 2018.

“This is all he’s known, and he had such a love for it. Good or bad, this is what he knew...fourth generation on this farm, we were a Century Farm. He talked about it a lot. That’s also a lot of responsibility; you have the generations ahead of you and you think I can’t be the one that stops,” Gillie said.

She told Keith countless times it would all work out. He had skills; all farmers do.

“I think he really struggled not being a farmer. He’d say things like, ‘I don’t know what I’ll do,’ Maybe get a job and not have the stress,” she recalled.

As Gillie looked out across her yellowing soybean fields on a cool September day she said, “He should be looking at this as it would be fulfilling. Even if we quit farming, chances are we’d be farming these home pieces. There’s always another horizon to look at.”

Gillie is still angry her husband took his life, but with the help of friends she is managing to stitch her own life back together. She is still farming with two of her neighbors and worries about the harvest and for all those other farmers who can’t see the horizon.

“I want them to understand it’s not the end-all, and I’m sure they don’t want them to do this to their family,” she said.

The Minnesota Department of Agriculture works on educating farmers, their families and others to identify and manage stress on the farm. The Minnesota Farm and Rural Helpline is a 24-7 phone line farmers can call to get mental health support and get directed to financial and legal assistance. The number is 1-833-600-2670. MDA also has other helpful information on its website at www.minnesotafarmstress.com.

In the next few weeks, the University of Minnesota Extension Service will begin training its extension agents throughout the state on recognizing stress. In addition, they will also work to train bankers, veterinarians and clergy to help identify stress in farmers and their families. Its website has helpful resources on it, too.