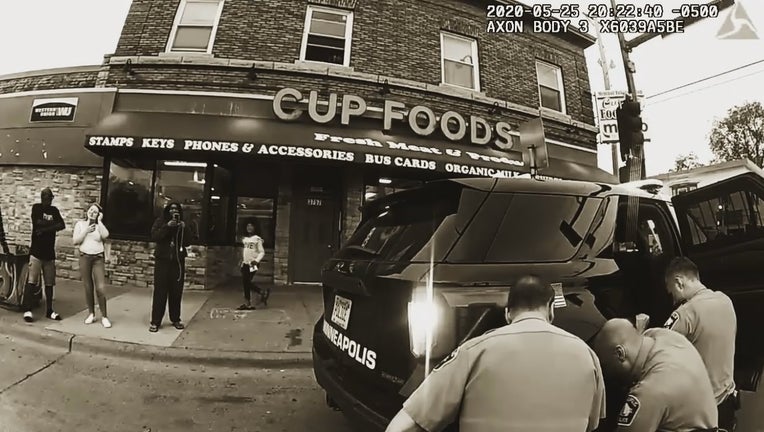 The death of George Floyd has shined a new light on questions surrounding excited delirium.

MINNEAPOLIS (FOX 9) - During the excruciating nine minutes that George Floyd laid face-down on the asphalt, with former Minneapolis Police officer Derek Chauvin’s knee on his neck, there is a critical and insightful moment.

It happens shortly after Floyd speaks his final words.  Officer Thomas Lane asks Chauvin if they should roll Floyd on to his side.

The FOX 9 Investigators made a public records request for all MPD training materials on excited delirium and positional asphyxia. &nbsp;It turned out to be a mix of disturbing viral videos and questionable science.

“I just worry about the excited delirium, or whatever,” said Lane.

Chauvin replied, “That’s why we have the ambulance coming."

That brief exchange may have said more about the state of policing in America, the questionable training officers receive, and the efficacy of some forensic science, than the public has yet to fully appreciate.

What is Excited Delirium?

Excited Delirium Syndrome (ExDS) is the medical diagnosis of someone who is hyper-aggressive and psychotic due to drug intoxication and/or mental illness, causing an adrenaline overdose, and a dopamine rush that leads to cardiac arrest and often death.

Police officers have also mentioned excited delirium in the deaths of Elijah McClain in Aurora, Colorado and Manuel Ellis in Tacoma, Washington.

And every cop it seems has a story to tell, of someone who ran naked through the streets, sweating profusely, psychotic or hallucinating, and seemed to possess super-human strength.

“It was perfectly clear to me that those police officers had not killed George Floyd,” said Parry.

In a series of articles for the conservative magazine American Spectator, Parry argues that Floyd died either from a drug overdose or excited delirium.

It is an argument that may very well foreshadow the trial of the four former police officers charged with killing Floyd.

Legal experts say the case will hinge on what caused Floyd’s death: the police officers, or something else.

Translation:  Floyd’s heart stopped, while officers were restraining him, and pressing on his neck.

An independent autopsy commissioned by the Floyd family, and conducted by Dr. Michael Baden, was consistent with Dr. Baker’s findings, but more specific, concluding that Floyd died from traumatic asphyxia.

Also known as positional, or mechanical, asphyxia, it is what happens when a person is placed in position making it difficult to breathe.

It is common during what’s known as ‘prone restraint,’ when pressure is applied to someone who is on their stomach, compressing their lungs.

But death can get complicated.

The toxicology revealed Floyd’s blood contained a small amount of methamphetamine, but a potentially fatal level of the drug fentanyl, 11 ng/ml (nanograms per milliliter).

There’s no mention in the memo or autopsy report of whether Floyd may’ve developed a tolerance for opioid use.

Floyd also had heart disease, was recovering from the coronavirus, and friends said he was claustrophobic.

A growing number of scientists and forensic pathologists are skeptical of the excited delirium diagnosis.

“Excited delirium hides under this banner of medical words, but has no scientific basis,” said Dr. Altaf Saadi, a neurologist at Harvard Medical School and Massachusetts General Hospital.

Dr. Saadi and her colleagues wrote a piece for the Washington Post debunking excited delirium as nothing more than ‘junk science.’

Dr. Saadi said the diagnosis is most often used after someone has died, often while restrained by police.

In the most comprehensive study to date, looking at the link between excited delirium and police restraint, Dr. Michael Freeman, an expert in forensic medicine and epidemiology, examined 168 documented cases of excited delirium.

Dr. Freeman’s study concludes there is a circular reasoning to the analysis.

Dr. Freeman and his research team were unable to find a single case where someone died from excited delirium alone, without some kind of restraint used.

“There’s absolutely nothing here in the data that doesn’t say they all died of positional asphyxia,” said Dr. Freeman in an interview. 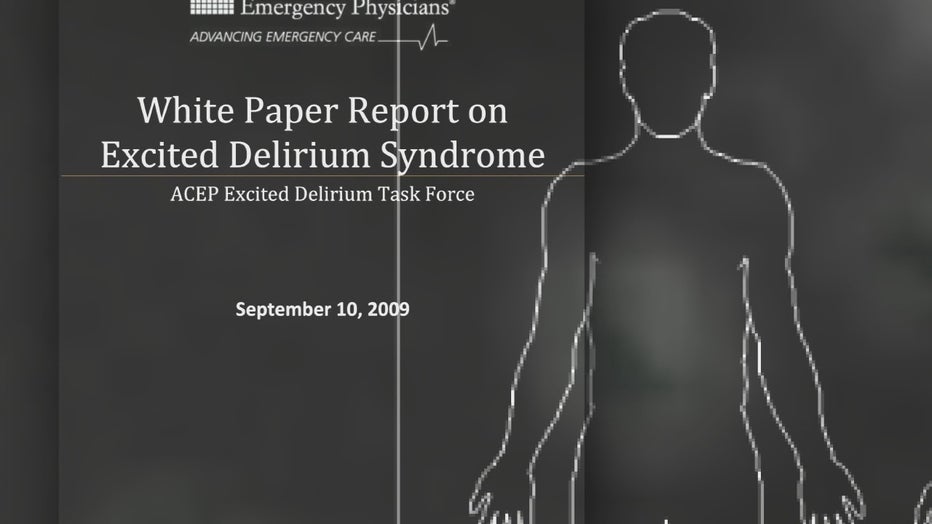 Origin of a ‘Syndrome’

The origin story for excited delirium is found in the psychiatric wards of the 19th Century, and what became known as “Bell’s Mania.”

In the mid-1980’s, researchers began using the term ‘excited delirium’ to explain the deaths of crack cocaine users in police custody.

Excited Delirium Syndrome (ExDS) was given its credibility by the American College of Emergency Physicians (ACEP), and a 2009 white paper on the topic.

The ACEP task force behind the white paper admits there’s a “lack of a clear definition and cause” and “the exact pathophysiology remains unidentified” and there is “no definitive diagnostic test.”

But despite those fundamental deficiencies, the task force argues excited delirium is a real syndrome and medical condition that often leads to death.

The ACEP did not respond to a request for comment.

Dr. Saadi said there is good reason to be skeptical of the ACEP white paper, because the group of doctors who wrote it, “were really biased,” she said. 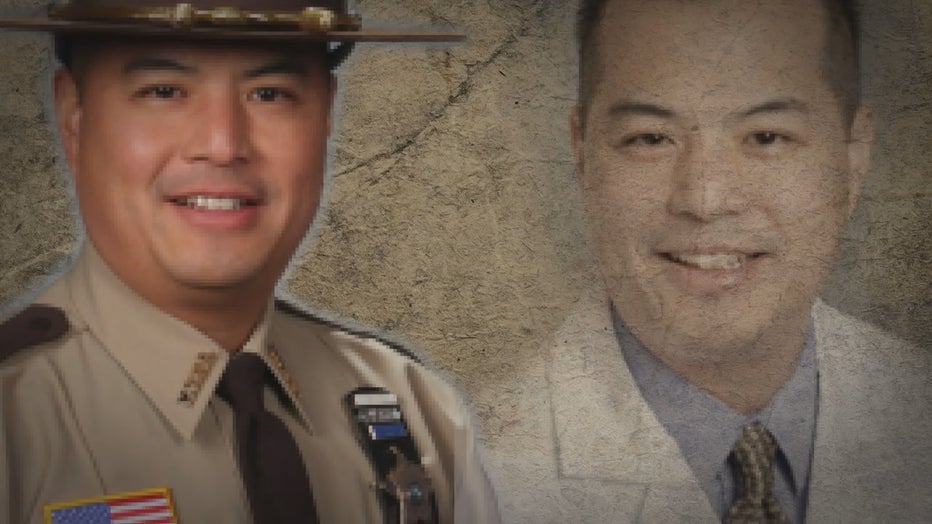 There are certainly potential conflicts of interest.

A Minnesota doctor who signed the white paper, Dr. Jeffrey Ho, is an emergency room physician at HCMC, and a Meeker County Sheriff’s deputy.

Dr. Ho was, until last year, a paid consultant for Axon Medical, makers of the Taser stun gun.  Axon had paid HCMC $140,000 a year for Dr. Ho’s services as a consultant.

An investigation by Reuters found Axon goes to great lengths to insert itself into investigations of in-custody deaths, using Dr. Ho and other paid consultants to present excited delirium as a defense in dozens of wrongful death lawsuits.

Dr. Ho was also the lead researcher in HCMC’s controversial study of ketamine, a powerful sedative that as the Star Tribune uncovered, Minneapolis Police may’ve pressured paramedics into administering to control suspects.

In a statement, Axon/Taser defended the diagnosis.

“We believe there is no longer a true debate among knowledgeable medical professionals on whether excited delirium syndrome is a valid diagnosis, as it has existed in the medical community for many years and has been the subject of hundreds if not thousands of studies and publications,” said an Axon/Taser spokesperson.

The Axon/Taser statement failed to note that many of those studies have been conducted by its paid consultants. 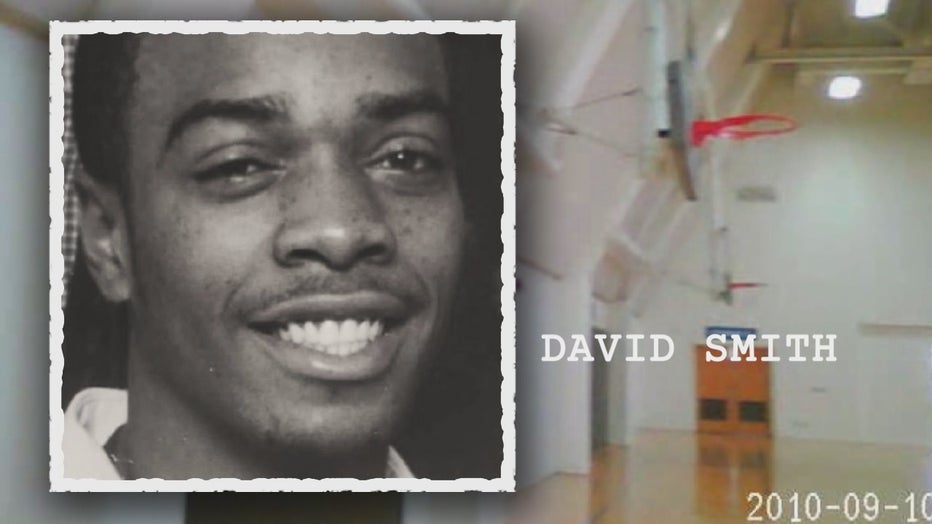 Jeff Storms, one of the attorney’s representing the family of George Floyd, is struck by similarities to another case he handled.

David Smith should have been a warning, he says.

Ten years ago, Smith was at the Downtown YMCA, and was acting unusual, according to witnesses.

He was approached by two Minneapolis Police officers and a struggle ensued.

The officers used a Taser on him five times.

With a knee on his back, the officers held him down for four and a half minutes, until he became unresponsive. 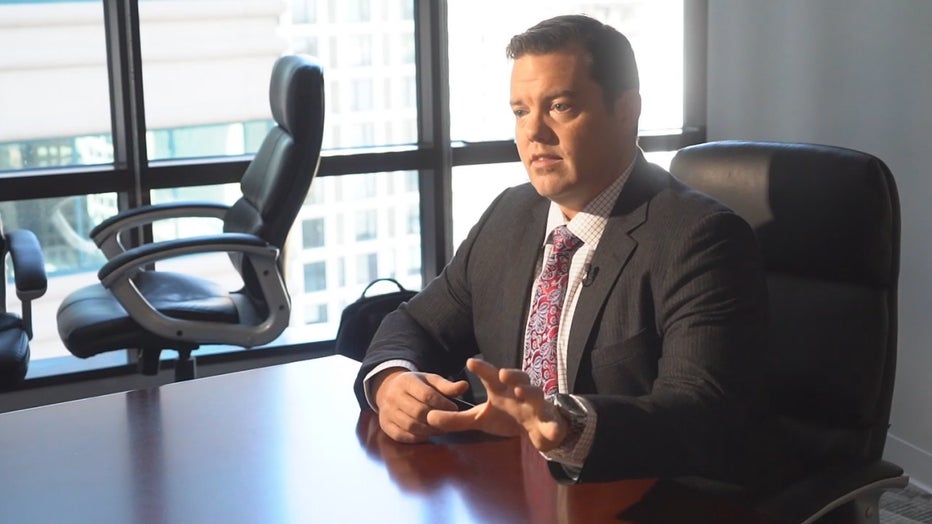 The cause of death was positional asphyxia.

“I thought we accomplished something in our litigation, so something like this never happens again,” said Storms. 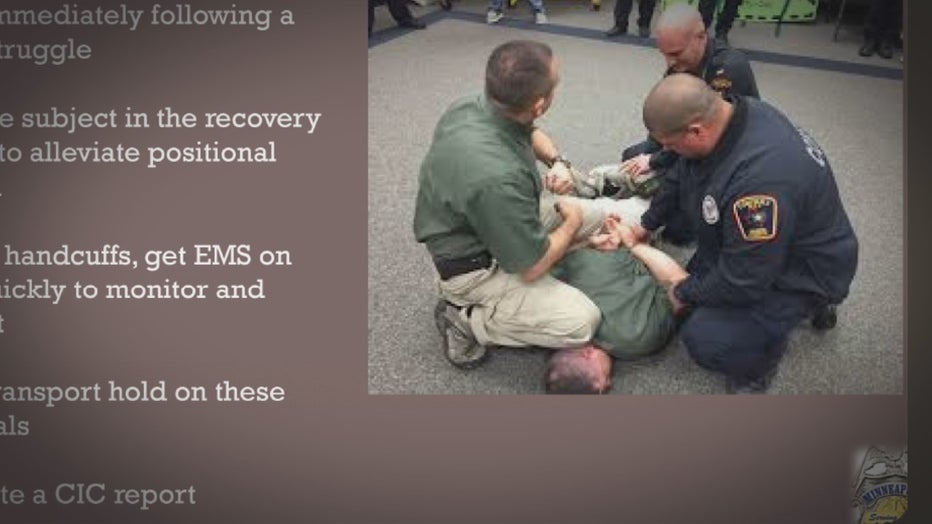 This Minneapolis police training slide shows officers using a technique similar to how George Floyd was held down. (Supplied)

In 2013, as part of a $3 million settlement with David Smith’s family, Minneapolis Police agreed to additional training in the dangers of positional asphyxia.

That training push included a video on the dangers of positional asphyxia, that was shown to all officers at roll call.

But the FOX 9 Investigators have learned that training video was deleted as part of the City of Minneapolis’ seven-year retention schedule for public documents.

The FOX 9 Investigators made a public records request for all MPD training materials on excited delirium and positional asphyxia.  It turned out to be a mix of disturbing viral videos and questionable science.

The videos appear to have been taken from YouTube and show suspects on Bath Salts. A drug known for producing extremely psychotic and often violent behavior.

The training materials also include PowerPoints that use degrading images to symbolize people with excited delirium, like the characters "Fat Bastard," Jack Nicholson in "The Shining," and the Incredible Hulk. 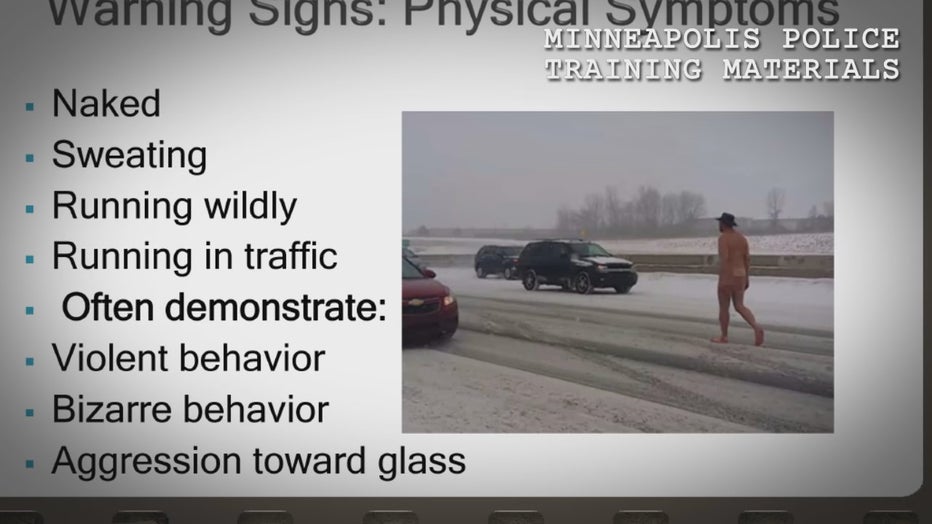 It lays out the warning signs for excited delirium, someone naked, sweating, running wildly into traffic.  Floyd, it should be noted, had none of these symptoms.

One slide says it may take “5 to 8 people to restrain” someone, recommending sedation with ketamine: “The sooner given, the sooner it starts working. “

Another slide shows a restrained suspect with an officer’s knee on his neck, similar to George Floyd, with a warning to “place the subject in the recovery position (sitting up) to alleviate positional asphyxia. 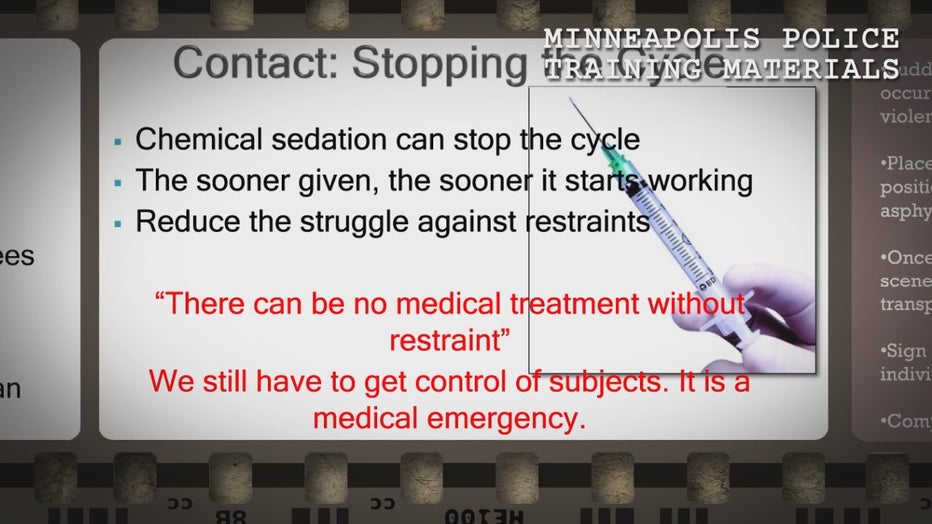 Another PowerPoint in 2013 says excited delirium is the “main culprit” of arrest-related deaths.

Asked how that conclusion was drawn, Minneapolis Police provided research studies that don’t support the conclusion and, in fact, suggest positional asphyxia may be the cause of arrest-related deaths.

“It starts from a pro-law enforcement defense anyway.  ‘It’s not your fault officer. This is the subject’s fault.  It’s something wrong with them,’” said Storms.

“It then gets adopted into training,” he said.

“So what trainers are you going to hire?” asked Storms.  “You’re going to hire these trainers who support excited delirium which is training that tells you you’re not at fault.”

Minneapolis Police said those who developed their specific training materials are either dead or retired.

For Dr. Freeman, who studied the 168 documented cases, there is little doubt about the role of restraint in cases of excited delirium.

“We can no longer use bad science, junk science, to support a position that is miscarrying justice on a regular basis.”