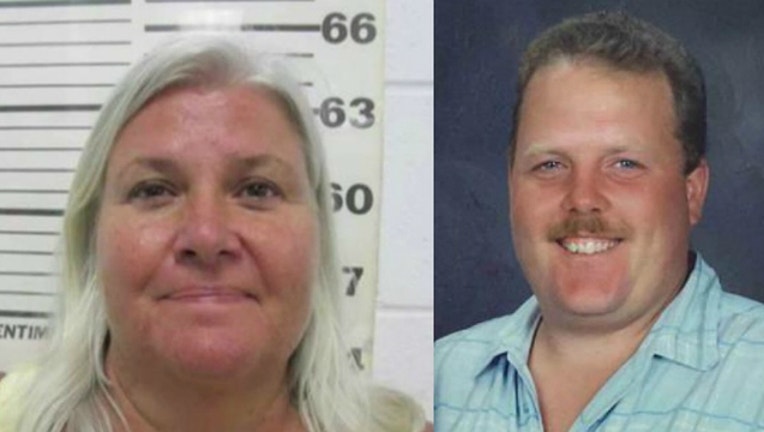 Lois Riess (left) and her husband, David (right). She allegedly killed him last month before going on the run for nearly a month.

(KMSP) - Pending forensic results from the Minnesota Bureau of Criminal Apprehension, the Dodge County Sheriff's Office intends to file second-degree murder charges against former Minnesota fugitive Lois Riess, the grandmother arrested last week in Texas for the alleged murder of her husband and another woman in Florida.

The 56-year-old will stand trial in Minnesota after being extradited to Florida, where she is wanted on charges of murder, criminal use of identification, larceny and grand theft auto.

Friday, Minnesota authorities said they were working to take advantage of the extra time to build the strongest possible case against the “stone cold killer.”

She has not yet been officially charged in Minnesota for the alleged murder of her husband, David, a 54-year-old Navy veteran who ran Prairie Worm Farms in Blooming Prairie, Minn., but faces one count of larceny for reportedly stealing $11,000 from his bank accounts to fuel her gambling addiction.

“Say if you want to start heading south, would you take 35 South?” Riess sweetly asked a cashier at 6:30 p.m. that same night inside a Kum and Go Gas station in Iowa. The gas station is right next door to the Diamond Jo Casino, where the Dodge County Sheriff says she spent the day. “Is that the way to go you think?”

Riess was on the run for nearly a month after her husband's body was found March 23, with what ended up being a nationwide manhunt ending only when a tipster recognized her at a seafood restaurant on South Padre Island, Texas.

The Lee County Sheriff's Office in Florida says Riess drove her Cadillac Escalade from Minnesota to Fort Myers Beach soon after her husband was found dead. Soon after, she was seen on surveillance video befriending her Doppelganger, 59-year-old Pamela Hutchinson. Riess allegedly shot and killed her new friend on April 9, later stealing her license, credit cards and Acura TL.

If convicted in Florida, she faces life in prison--or the death penalty, if charges are upgraded.